In a conflict between five factions trapped on the eponymous space station in deep space, only one can survive …

This is the kind of board game that hits the sweet spot for me—atmospheric, interesting, well-designed graphically, doesn’t outstay its welcome, and not too much of a brain-burner. A few mechanisms require you to stretch your imagination a bit to justify thematically, but this is not a tactical simulation game, it’s a clever movement and card-laying game overlayed with a tasty scifi theme.

On the abandoned space station Theseus, you play a faction—Marines, alien Greys, Gigeresque Aliens, or Scientists (there’s also a mysterious fifth Faction, Pandora, for advanced players). Seemingly trapped endlessly in clockwise movement, your three units move from sector to sector, setting off combat, actions, special cards you’ve installed in slots on the sector boards, or even traps laid by other factions. Your head can spin a little as you try to plan out the movements of other players, because your unit moves as many sectors as there are units in the sector in which you begin your move.

Theseus really shines as a two player game because you can plan out these moves with a decent amount of certainty and install your cards accordingly. There’s also a four player, two team option that works well. Three and four player games are somewhat different because a lot of chaos is introduced to the game, however I still find it very enjoyable—though less strategic and more luck-based.

The graphic design is very professional and there’s a consistent feel to it that, thankfully, steps away from the Warhammeresque Gothic scifi that is all the rage and back to the kind of Rendezvous With Rama, 2001: A Space Odyssey, original Alien-style scifi that may possibly be coming back into fashion.

Definitely worth adding to your collection. 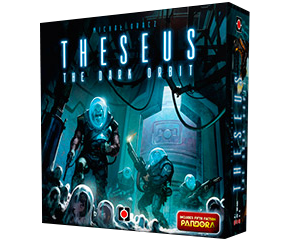