Lead a team of desert commandos in a WWII multi-scenario deck builder with vehicles.

It was no doubt inevitable that after the success of the excellent Undaunted: Normandy that we would see expansions set in other theatres of war, but this self-contained new game takes things a step further by reducing the scale of the battles even further to individual fighters engaged in desert skirmishes and sabotage missions, and adding vehicles to the mix.

This is a game that definitely rewards repeated play and an understanding of the scenarios, and I must admit I haven’t quite grasped the subtleties of honing my deck until it’s maximised to achieve my objectives. Instead I find myself feeling limited by the game mechanics—but I fully understand that this is due to my lack of time to devote to the game, not its failings!

In fact, this reminds me of my early experiences with Memoir ’44, when I felt constrained by drawing cards that allowed me to only activate troops on particular flanks. It took a while for me to realise that part of the overall strategy was to wait until I had the right cards to achieve my plans. The Undaunted games are similar in this respect. They’re not wargames, they’re card games. And very good ones, once you embrace that. 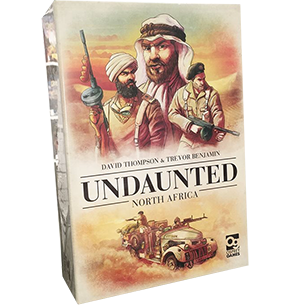