June, 1944. Through the D-Day landings, the Allies have seized a foothold on the beaches of Normandy.

This small-but-perfectly-formed card game with terrain tiles landed with a big splash, and has been universally praised for its clever mix of deck-building and tactical play. You control a small squad immediately following June 1944’s landings at Normandy, either as the Allies pushing into the French countryside or the Germans trying to hold them back.

With the small number of troops at your disposal in each of the game’s 12 scenarios (you can link them together for campaign play) and the fact that each squad member card has an individual personal name, you’ll feel a more personal connection to them and a need to carefully use each to the best of his capabilities. But you’ll still have to make hard choices and sacrifices to optimise your deck depending on the scenario’s goals.

There’s a wealth of play in this small box and the game is really engaging. Undaunted Normandy feels like a more intimate Memoir ’44, which is high praise indeed as the latter is one of my favorite games.

I most also mention the clear and functional graphic design, especially the ingenious bar at the bottom of each scenario which allows you to pick the required terrain tiles quickly and easily.

If you need more detail before adding this one to your collection, check out the truly exceptional Shut Up & Sit Down review (and be sure to stay until the end). 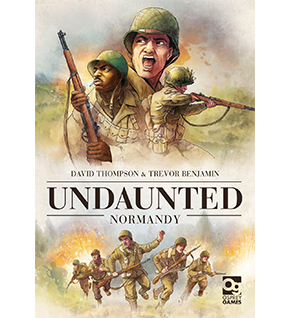