Triton Noir very kindly offered me a copy of their WWII commando missions coop game V-Commandos, and after quickly checking the reviews on Boardgamegeek, I was very happy to accept it! And now I have a couple of games under my belt, I’m also happy to say it will be a treasured addition to my collection. In an industry full of games that try to capture a theme with a lot of fluff text on cards and fancy miniatures, Triton Noir have cleverly pulled off the magic trick of creating simple mechanics that immerse you in the game’s theme with invisible ease.

The first thing that impresses you about V-Commandos is the ingenious modular scenario system. Instead of a book full of scenarios, each is made up of a number of modular ‘terrains’, each of which corresponds to a terrain card that outlines a set up of tiles and counters and objectives. And you can easily put a few of these together—say, the cliff, tower, and underground base—to instantly make your own scenario. It’s a brilliant solution to scenario design that’s one of those ideas I’m amazed no one had thought of before.

The other secret of this game’s success is not only that the designer wasn’t afraid to drastically simplify the mechanics in the pursuit of a fun game, but that those simple mechanics capture the flavour of the theme so well. V-Commandos is all about stealth, and your commandos want to avoid setting off the alarm for as long as possible as it will double the number of German reinforcements. But how do your commandos stay stealthy? By moving into different terrains. A commando automatically goes into stealth mode when they enter a small tile, automatically becomes visible when they enter a large one, and has to pay double the movement allowance to stay stealthy when moving onto a medium tile. It’s a brilliantly simple mechanic that makes very choice a nail-biter and the order you choose to move your commandos a vital decision. Luck pays a part though; if there’s an enemy on the destination tile you have to roll a 3-6 on a six-sided die or you’re spotted. Some people don’t like this element of luck in V-Commandos, but I think it’s exactly was needed to steer the experience away from puzzle to fun game.

Combat is simple and fast—roll a number of dice and beat the score printed on the tile the target is in; no mucking about with complex line of sight and defence rules. Hits reduce the effectiveness of your commandos. You can only close combat if you’re stealthy, and it automatically kills your target. As you can see, every rule is fine-tuned to support the theme, not create a ‘simulation’ of combat and stealth—and that’s why the game is so incredibly immersive and enjoyable. Highly recommended!

Triton Noir recently had a Kickstarter campaign for their new game Assassin’s Creed: Brotherhood of Venice, and if turns out to be anywhere near as good as V-Commandos I’m calling it a must-buy. And this time, it’s got miniatures …

This summary and reference includes the rules from the Résistance expansion. 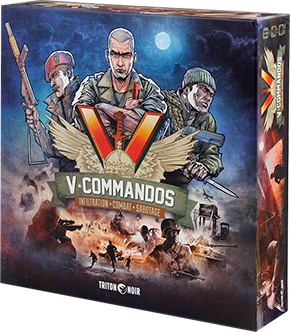