In the grim darkness of the far future there is only war.

Here we are again with another edition of the most popular tabletop miniatures game in the world—Warhammer 40,000. I’ve been around since the start, buying the original Rogue Trader hardbook and some of the metal space marines when the whole juggernaut started up in 1987, but I can actually count the number of times I’ve played on one hand. This may finally change with this edition, as I invested in the huge Indomitus boxed set, painted it up, and played my first game in twelve years. And it was huge fun!

Yes, I still think there’s too much dice rolling and they could just lose the ‘roll to wound’ step to tighten up the game, and it’s certainly way past time for alternating activations, but apart from that it was an epic, fun game full of hugely cinematic moments. And it was also one of the most beautiful looking tabletop games I’ve ever played. The level of quality that Games Workshop produces these days is like no other in the industry. Of course you pay top dollar for it, but I’ve learned to accept the inevitable and grit my teeth. Because when it comes down to it, when the whole thing is set up and you’re playing, there’s nothing quite like the dice rolling epic gothic scifi madness of a game of Warhammer 40,000.

Here’s my rules summary and reference for the publicly available core rules—all reduced to a single double sided sheet with nothing left out. It includes a set of redesigned unit cards for the Space Marine and Necron forces in the Indomitus boxed set. 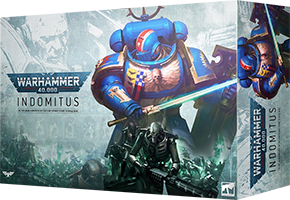