Games Workshop followed up 2018’s first edition Soul Wars set with 2021’s Dominion, another excellent boxed set, this time featuring the Orc-like (‘Orruk’) Kruleboyz as well as, of course, the ubiquitous Stormcast Eternals. 58 beautiful miniatures to get you started.

After the relative simplicity of the second edition rules, complexity has begun to creep back into the Age of Sigmar, with a greater emphasis on command abilities in an attempt to shake up the fundamental ‘I go, you go’ nature of the game play. I’m still not sure why they just don’t go all the way and finally introduce alternating activations!

So while we’re still locked to the old ‘roll to hit, roll to wound, roll to save’ Warhammer, and you’ll still be rolling countless handfuls of dice in an average game, there’s no denying this is a very impressive edition, and the support in terms of narrative play campaigns and countless enhancements and abilities is huge. When it comes down to it however, it’s still about the miniatures. Despite the outrageous costs and the somewhat clunky rules, Age of Sigmar is still leader of the fantasy pack with its absolutely beautifully designed and realised miniatures.

Now that I receive freebies from Games Workshop I’ve been able to learn more about the variety of Age of Sigmar armies and support material available, and it certainly is admirable. Third edition has kicked off a series of lovely starter sets with two sample armies in each and a short narrative framework: Echoes of Doom, Arena of Shades, and Arcane Cataclysm.

Obviously Age of Sigmar is doing well and here to stay. 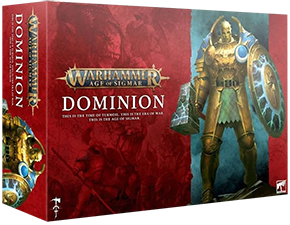