I was never a player of Games Workshop’s Warhammer Fantasy Battle game, but I was frustrated when GW destroyed their Old World setting and replaced it with something that featured warriors that looked very suspiciously like fantasy space marines. But I did decide to give it a go when the Second Edition Soul Wars starter set came out, mostly because I love the ghost miniatures (the space marine-like Stormcast Eternals, not so much), and the set was such surprisngly good value. I’ve read much of the hardcover book that comes with it, and the new background of interlocking pocket worlds floating together in some kind of alternate reality still does absolutely nothing for me; I much preferred the humour and grittiness of the Old World. But the game is quite fun. Yes, it still suffers from the old ‘roll to hit, roll to wound, roll to save’ process that GW just can’t seem to give up on, and there is way too much dice rolling. But in every other respect it’s been cleaned up and streamlined, and most of the game information comes on ‘warscrolls’ (unit cards to you and me). In fact the core rules are even made publically available in a short PDF document, which allows me to summarise them and make them available here.

Along with the summary and reference sheet, I’ve included my smaller, more compact design for the warscrolls in the starter set: they cut out all the descriptive fluff and just give you the facts.

GW still makes the most beautiful miniatures in the business. Unfortunately, they’re also the most expensive, especially for me in NZ. But if you can afford it, this new incarnation of Warhammer is quite impressive. 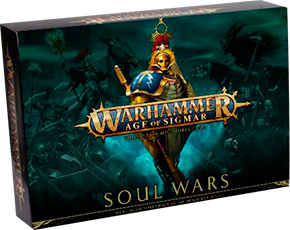