Find the treasures, battle the magister, escape the labyrinth!

This introduction to cooperative dungeoncrawling is probably the least of the batch of ‘small box’ Barnes & Noble games Games Workshop re/released this year, if only because it messes with a formula that already worked fine. It’s based on the big box Warhammer Quest games of recent years (Silver Tower, Blackstone Fortress, Cursed City), but for strange reason they’ve taken out the ubiquitous combat roll, so you just assign damage to your enemies (and vice versa) by spending one of your already-rolled dice. Gone is the time-honoured drama of rolling to hit! It’s a strange decision and makes this one fall a bit flat, despite the addition of an ‘action chain’ that makes for heroic strings of cooperative attacks.

Still, if you’ve played a few games and just can’t bring the evening to a close, you could do worse than a quick half an hour of dungeoneering, and there are a generous 12 adventures to work through. The ugly boards will definitely make you miss the usual tiles (though they’re fast to set up), and you’ll have to dig out miniatures to replace the enemy counters, but hell, it sure beats going home early! 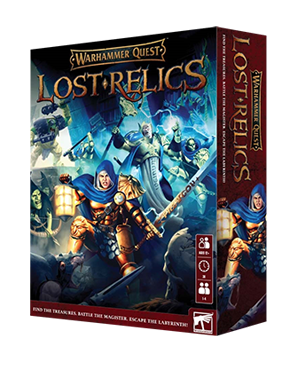