Only the bravest warriors have a chance to escape the cursed city of Shadespire!

Luckily, the game is not confusing as confusing as the name; it’s fast and fun, has a small deckbuilding element, and is probably the most ‘modern’ game GW has put out for decades. That’s because it finally puts aside the old ‘roll to hit, roll to wound, roll to save’ system that features in almost every GW game and always strikes me as a millstone the company insists on carrying around their neck. Though I suppose there would be a huge uproar if GW changed the system in their main tabletop games (though they did manage to get away with destroying their venerable Old World setting and replacing it with Age of Sigmar, so big changes can be pulled off).

But back to Warhammer Underworlds. There’s a bit of Heroscape DNA here, but also some Dungeon Command, and it succeeds in being a snappy game of competitive warband grudge matches, livened by a deck of objectives (earning you glory points for the win) that raises the gameplay up from a simple ‘kill the other guy’ bash. The new Nightvault (where I bought in, though I ended up buying Shadespire as well) adds a bit of spellcasting to the proceedings. By the way, my summary is branded Nightvault as that’s the most recent and complete set of rules.

It’s great to see GW doing something different. The miniatures are, as always, stunning, and new generic cards in each set give you the extra impetus to buy the sets. I think it’s games like Warhammer Underworlds that will take the company into the future – after they’ve finished redoing every game in their own back catalog, that is. 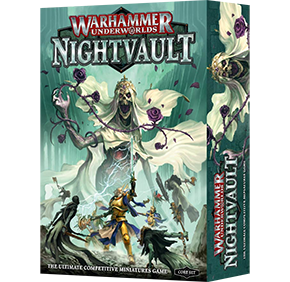