Take the online game to the tabletop.

Gale Force Nine do a lot of different things these days—D&D miniatures, great licenced boardgames, tabletop terrain (how I wish they’d bring back those big ruined buildings they used to make!)—and, owned as they are by new Zealand-based company Battlefront (who make the WWII miniatures game Flames of War), miniatures tabletop games too. World of Tanks Miniatures Game is a new version of an older game that focusses on tank battles, freshly branded with the World of Tanks video game livery to bring in a few new punters.

I missed this the first time around but I’m glad I’m here for the fresh new version, because the tanks are now pre-constructed and primed in appropriate base colours, and it’s quick and easy to do a bit of lining and highlighting and weathering to make them look fantastic (make sure to check out my tutorial video). The game is good too; basically a more straightforward Star Wars: X-Wing with a single movement arrow (my only criticism is that there should have been two of these in the box) and an attack roll/defence roll system that puts the emphasis on the defence. Which seems completely apropriate when you’re playing with armoured tanks!

Once you’ve grasped the system, you can add complexity with a whole range of upgrades, crew and enhancements to personalise your tanks. And while you can have a fun game with the four provided in the starter set, I’m looking forward to adding more and making my battles a bit larger and longer. And by the way, if you don’t rotate the turrets to point at your target when you’re about to fire—well, you’re just not my kind of gamer. 🙂 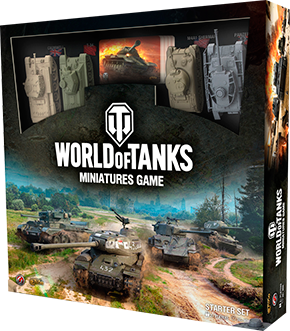