I Was There At The Birth

The road goes ever on and on.

Guest writer Steve Hill was there when it all started. Gather ’round, as he tells you about an adventure long, long ago …

Rumours on the wind, rumours in the water.
The birds and beasts told of a new thing; the birth of something.
The White Dwarf had spoken.

My father was sceptical.

“Nothing good will come of it.” he said, gazing at the gathering clouds, a hint of concern crossing his usually impassive face.

“I should very much like to see this thing.” I pleaded. “It will not happen again, not in this age of the earth. We must go to Lunnun to visit the Hammer Smith.”

“You cannot go alone.” he insisted. “For you are but 16 years of age, and the journey is perilous. There are many dangers in this world, and many creatures that might seek to do you harm. Lunnun is not safe.”

“You could come.” I ventured, expecting the worst. But then a strange thing happened. A curious half-excited, half-fearful look crossed his face.

And then that fateful day dawned when Lunnun lay at the heart of all things, a nascent life poised to take its first breath. My father summoned the mechanical chariot and our quest began. Heading east, we passed through the ancient Grey Lands and upon joining the Aythree, found ourselves at the Hind’s Head. Soon we reached the Hazel Mere where we abandoned our chariot and took the Iron Road north. I remember little of that journey, for though it was long and arduous, there was little to report. I caught occasional fleeting glimpses of places that I once thought to be just myth; the Ford of Guilds, the Castle of King Wo, the mysterious Sea of Batt. And then they were gone. We had reached Lunnun.

But the Iron Road would only take us so far. There was another path that we had to take. I remembered my father’s fears, as we headed for the long dark of The Underground—a labyrinthine system of caves and tunnels that had been bored by the ancients beneath Lunnun in ages past. I will make no account of the horrors that we witnessed, for there are foul things beneath the earth that have been there since the shaping of this part of the world. Let them stay there and not trouble an already troubled land.

Every pit has a bottom and every journey an end. And so it was with The Underground. Gradually, imperceptibly, the light began to grow. The occasional tantalising shafts of light gave way to roofless caverns and then suddenly, we were out.

We had found the Hammer Smith.

Footsore and hungry we trudged on. And then we were there. We were not alone. Many other pilgrims had assembled at the alabaster doors of the temple. We would have to take our turn. 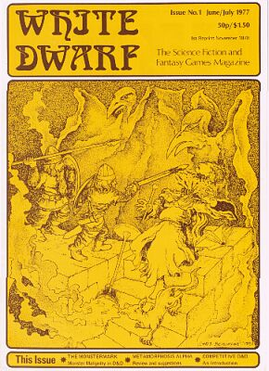 All of which is to say that in April 1978, my father very kindly came with me to the opening of the very first Games Workshop store at 1 Dalling Road in Hammersmith, London, UK. I was lured by the prospect of free goodies for the early arrivals (Empire of the Petal Throne for the first in the queue) and a plethora of board and role-playing games. We did not get there soon enough to qualify for any freebies, nor did my father get to set foot in the store, as I spotted a friend nearer the head of the queue and slotted myself in with him, leaving dad on his own. He (my friend that is) should be visible in the picture, but I wouldn’t like to say which one he is for fear that he might read this and call me out. I am pretty sure that I am not in the picture, but it is possible.

If I am honest, I recall very little of the day, but I do remember browsing round the store. I bought several games. was definitely War of the Ring: The Game of Middle Earth by Fantasy Games Unlimited. I wasn’t terribly impressed by it and eventually got rid of it. Big mistake! The game was not licensed, and it is now very hard to find. I may also have bought The Battle of Helms Deep, but I cannot be sure. I still have this one somewhere in the loft. It is a chits-on-map style of game that came in a plastic bag—a top quality production. Did I buy the TSR Battle of Five Armies game then? Maybe—the timing is right. I still have it somewhere, although the D20 got appropriated and painted several times for service in D&D games. If I recall correctly, it was originally bubble-gum pink.

Back in those days, Games Workshop was not the multi-headed hydra that it has become. They were licensing and distributing games from other manufacturers and White Dwarf magazine had more of fanzine feel to it. They had a regular column with new D&D monsters—something that eventually lead to the Fiend Folio monster supplement for Advanced D&D. I submitted several of my own monsters, but none got published. This might just possibly be because they weren’t very good.

So began a long and often expensive on-off relationship with Games Workshop. Sadly, they abandoned the old store quite a few years ago. It seems to be a yoga studio now—I wonder if they kickstarted the business, and did they have any stretch goals? Do they know that they are trading on hallowed ground?