An Interview with Jim Bailey 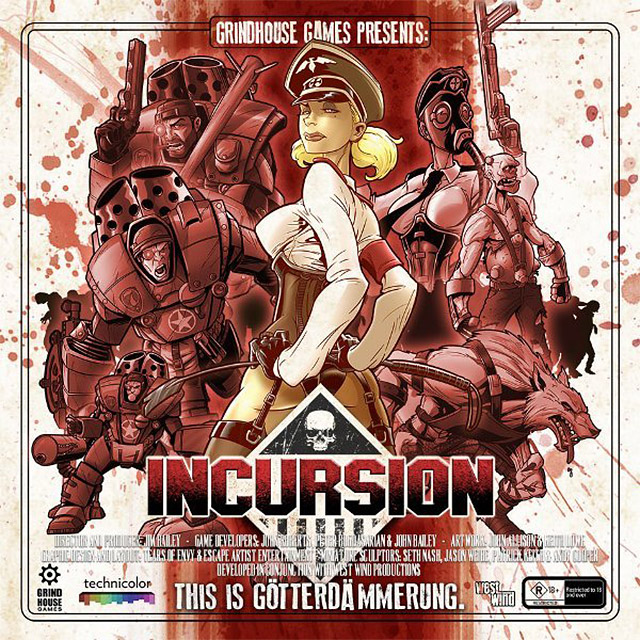 Welcome to the Grindhouse

Incursion is back! Grindhouse Games have resurrected this fantastic game of weird war combat between power-armoured Allied soldiers and twisted Nazi experiments in a bunker under Gibraltar, and are bringing you a second edition via Kickstarter. The campaign has already reached its $75K funding goal and is charging towards stretch goal rewards.

Some years ago I created the rules summary sheet that came in the box of first edition Incursion, and got to know Jim Bailey of Grindhouse Games, a guy who brings a much-needed hot chilli blast of rock‘n’roll enthusiasm to the boardgaming world. It’s long overdue that Incursion was brought to a wider public of gamers who love action-packed, immersive combat games with stunning miniatures. We asked Jim a few questions about the new edition and the development of his creation.

EOG: What came first when you designed Incursion, the mechanics or the theme?

ABT, baby! Always Be Theming :-). Actually, I was sitting around with the gang way back when we were developing Secrets of the Third Reich: 1949 for West Wind Productions and said: wouldn’t it be cool if we had some US dudes in powered armor gunning down German zeds in a bunker crawl? Everyone around the table started throwing out ideas about setting and rough mechanics. Gibraltar was one of the first things that came up. In fact, an early name for the game was Rock Ape ’49. It was derived from the term for the native monkeys and the moniker attached to British troops stationed there during the war. Dovetailed nicely with our APE (Armored Personal Exo-system) concept. Ultimately we decided it was a bit too esoteric. We make a pretty good Ameritrash poster child. Theme is critical. Without a story you can sink your teeth into, you’re just doing math. EOG: Is the weird war genre one you’re particularly interested in? Did you do any research do for the historical aspects? What influenced the theme—movies, books, comics etc?

I’m an amateur historian. WWII fascinates me to no end. Since I was a kid I’ve been reading history. I was reading biographies of Andrew Carnegie and Alexander the Great when I was 7 years old, mixing the hard stuff up with Captain America comics and Robert E. Howard. Pretty demented, huh? I actually sold my Golden Age comic book collection to fund the first edition of the game. You’ll note the absolute bits of accuracy throughout our weird war concepts. Where appropriate, uniforms and weapons are period perfect. You’ll also note things like the accurate rendition of the elusive British EM-2 assault rifle as a very subtle “weirdness”. So many World War II games rely on this sort-of paper ephemera device. When it goes really weird historically is the seventies. Men’s magazines, Grindhouse film, and cheeseball fiction. We totally embraced this genre as an overarching design concept.

EOG: What kind of games do you enjoy? If so, any favorites and why? Were any a particular influence on the development of Incursion?

I’m a wargamer and as such I have to feel the world I’m playing in. I have to believe it, even if it’s in a comic book suspension of disbelief sort of way. I have to want to be there. Does that make sense? While I desperately love Rise and Decline of the Third Reich, World in Flames, and countless other more obscure chit-based games, my heart really sings with more immersive and visually expressive platforms. I became a miniatures gamer in the eighties and have painted thousands (maybe tens of thousands) of miniatures since I was a kid. I’ve been immersed in lots of tabletop wargames over the years. Okay, I have a guilty secret admission that will immediately cause your readers to lose all respect for me: my favorite game of all time is the original Axis and Allies… cos it comes with a bunch of plastic tanks and bombers and battleships 🙂 I’m still just a kid, I guess.

It’s a knuckle-biting experience from beginning to end, mission to mission, game after game. It is an utterly visceral cinematic experience.

EOG: There was some comparison with the game Space Hulk when Incursion first came out—what mechanics does it share with Space Hulk, and what makes it different from that game?

It’s a fair comparison. Once the thematic concept was floated, our thoughts naturally turned to Space Hulk. Bear in mind that Space Hulk had not been in print for 20 years when we started. We actively set out to pay homage to a “dead game” that still lived in our hearts. Man I was broke as a high school in the late eighties… I’d make my own boards out of old bits of sheetrock and plywood with markers and spraypaint and use whatever models we had at hand! This game, whilst sharing some of the basic action point mechanics of SH, deviates far and fast. For starters, nobody has to play the Genestealers 🙂

Indeed. What we have created is a system where the outcome of the game is in doubt no matter which side or what mission you are playing until it’s over. This is largely due to the Battle Card mechanic. Battle Cards are nerfs and buffs and special events that play a huge role in every game. They interact thoroughly with every other mechanic and can turn a hopeless situation into a win. They are not random as they can be countered by opponent cards and inherent command points but they add an incredibly rich dimension to gameplay.

I’m an architect by profession. I actually spent a couple of years in college pursuing fine art before I realized that I sucked :-). You’ve heard of the modernist term “form over function”? I am a contextualist. I believe that form and function are so deeply interrelated as to be indistinguishable. Whoops… that didn’t answer your question at all, did it? 🙂 Next!

No longer does the machine stand in the way of what we want and the people who want to give it to us. We are all masters of our own destiny.

EOG: Why the relaunch of Incursion and why the Kickstarter route? Any reason for people who got Incursion before to buy in again? Will future Grindhouse games be Kickstarter funded? Your opinion on Kickstarter in general?

Incursion never really reached its full potential in terms of either audience or accessibility. We’ve only sold 2,500 or so copies of the first edition box (with cardboard stand-ups) and fewer of the SNAFU expansion book. We have however done very well with metal miniatures sales. We believe that there is an audience for this game that simply has not heard of it or was put off by paper stand-ups or the cost of metal miniatures or whatever. Kickstarter allows us to potentially shoot the moon and make the economics of ready-to-play, out-of-the-box plastic components work. Reason to buy again? Phenomenal new art, plastic miniatures, and for the first time, printed SNAFU components. We’ve priced the campaign with several manufacturers. At the moment we’re leaning toward Panda. These guys can deliver incredible component quality. I can’t wait to feel the linen embossing when I hold this in my hands!

On Kickstarter in general—we’re all connected to each other now in a way that was unimaginable even a decade ago. Global anarchy of broadcast thought! Witness ye the Arab Spring: 100% a product of virtual connectivity. We the people have entered a gilded age of personal freedom of expression. This extends particularly to creative media with the advent of crowd-funding. WOW. No longer does the machine stand in the way of what we want and the people who want to give it to us. We are all masters of our own destiny. We’re smart enough to decide for ourselves what should be supported and what shouldn’t. We don’t need the machine to tell us what we should buy from amongst its limited offerings. You and me… we call the shots… That’s how I feel about it anyway.

It’s not just a game. It’s a total immersion. You’ve probably see the trailer video on our Kickstarter page? If not, play it large and loud. This is what you are getting in the game play. It’s a knuckle-biting experience from beginning to end, mission to mission, game after game. It has years of love and refinement poured into it. It is an utterly visceral cinematic experience. EOG: Any plans for the future you can tease readers with? What’s next for Grindhouse Games after this campaign?

What do you want to see? For Incursion, I want to do a Pacific bunker crawl expansion with US marines facing off against the Japanese in a Weird War setting with 3d plastic modular bunker/cave sections. Roberts wants Ostfront.

Beyond Incursion, we have soooo many ideas and concept sketches that have built up over the years. We’re hoping this Kickstarter (or the next) will bust us out of our day jobs so we can be in full-time design mode. Those ideas range from massive miniatures-based strategic-level boardgames to tabletop wargames. Turn us loose!

EOG: Thanks for your time Jim, and good luck with the Kickstarter campaign!

Good to speak with you again, Peter. Thanks for the chat. Keep on keepin’ on!