A bunch of intergalactic ne’er-do-wells get together to take on pigs, lizards and stormtroopers in the Star Wars: Edge of the Empire Beginner Game.

The Star Wars: Edge of the Empire Beginner Game was released by Fantasy Flight Games in 2012 to herald the first of three roleplaying game systems set in the Star Wars universe: Edge of the Empire. It’s a one- or two-session introductory adventure that comes with a nice double-sided map, counters (referred to as ‘standups’ in the rules; someone made a budget cut there), detailed character folios, custom dice (the game uses an improved version of the narrative dice mechanic introduced in Warhammer Fantasy Roleplay 3rd Edition), and a cut-down copy of the game rules (no character generation rules, for example).

I’d run the adventure once before with just one player, but this was the first time I’d tried it out with all four characters in the box. So, with yours truly as GM, Simon as hired gun wookie Lowhhrick, Angela as colonist droid 41-VEX, Brett as Twi’lek bounty hunter Oskara, and Neil as human smuggler Pash, we gathered around a table one weeknight to explore a backwater spaceport on Tatooine called Mos Shuuta, tucked firmly away in the less fashionable end of the galaxy.

Warning: Spoiler Alert! If you want to play the Star Wars: Edge of the Empire Beginner Game and don’t want all the surprises ruined, don’t read any further.

Being a big fan of atmospheric background music during RPG sessions, I queued up the Star Wars theme music (starting with the 20th Century Fox fanfare), which immediately got everyone laughing and into the mood. In fact—and I don’t know if this is just coincidence—I read out the introduction to the adventure over the theme, and finished just as it faded off at the end. Perfect!

The game opens as the characters rush into a cantina in Mos Shuuta, so I immediately started the cantina music from A New Hope (I still hate calling it that—it’s just bloody Star Wars, dammit!) and launched into the adventure. I hadn’t explained any rules or prepared the players at all as I wanted the emphasis to be on the fun and the story, not rules, and they’d easily pick up the dice mechanics as they went along. I do recommend however, that you explain the dice results in detail for the first few rolls, making sure the player understands—don’t just let them roll and then let you do the work. After a few times the players were quickly sorting out their own results.

Back at the cantina, chased by Teemo the Hutt’s Gamorrean thugs, our players scatter. Lowhhrick and 41-VEX hide in booths on opposite sides of room, Lowhhrick slipping his blaster under his fur. Oskara lounges casually at the bar, concealing her blaster, and quickly impressing the Devaronian bartender who buys her a drink and asks if she is interesting in a dancing career. Pash jumps on stage, immediately charming the Twi’lek dancer with his dashing bravado, and tries the door behind her.

Oskara rolls back off her barstool, aims with her blaster and fires, drilling a hole in another thug.

Four porcine Gamorrean run squeeling and grunting into the bar, wielding cudgels and looking about them. Two immediately notice the big hairy wookie trying to hide in a booth halfway across the room and rush towards him, while the other two head for Oskara. Lowhhrick gets a blaster shot off at one, then drops it in preference for his vibro-axe. He shrugs off a cudgel hit and slices one of the Gamorreans in two, splattering blood all over his fur. Oskara rolls back off her barstool, aims with her blaster and fires, drilling a hole in another thug. Pash tries to pick the lock of the backstage door, fails, kicks at it, and eventually turns and fires at the thugs.

The smell of crispy pork fills the air. The last Gamorrean runs for the entrance but a missed blaster shot hits the pourstone by his head and he stops short. A few cowering patrons shout out “kill the piggy bastard!” Oskara makes the kill shot and it squeals and falls to the floor.

After a brief, shocked silence, the cantina music starts up again.

The bartender favours the four adventurers with a slow clap, then sets out four glasses on the bar, pouring out four slugs of Gamorrean slime juice. “This one’s on me”—and to Oskara—“are you sure you’re not interested in a dancing gig?”

Deducing that the group are on the run from Teemo the Hut and are probably in need of off-planet transport fast, he suggests the Krayt Fang at Landing Bay Aurek, owned by a Trandoshan slaver called Trex who’s an associate of the Hutt’s. The bad news is that it’s stuck groundside until Trex can get its hypermatter reactor igniter replaced. The good news is that the bartender also happens to know there’s a hypermatter reactor igniter over at Vorn’s junk shop. 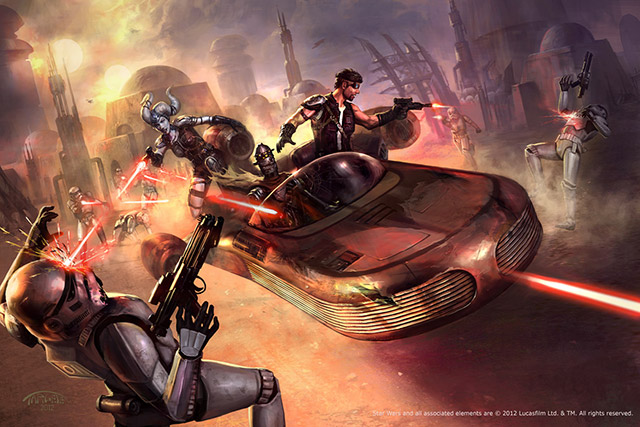 Illustration by J.P. Targete for the Star Wars Edge of the Empire Beginner Game

The adventurers step out into the glare and walk to the nearby shop. There they meet the cranky old owner Vorn who, surprisingly, falls immediately for their line about picking up the part for Trex. Without much difficulty they get the HMRI and head out into the harsh sun again.

Pash uses his pilot experience to deduce that the ship would need clearance to lift off. Next stop—spaceport control. They come up against two annoying droids blocking the entrance, and despite a few blundering attempts at deception, they have no success getting past them without authorisation. Instead, they decide to head directly to Landing Bay Aurek, hoping to find some form of authorisation on the ship itself. As they head down the dusty Mos Shuuta street, the roar of engines passes overhead and an Imperial shuttlecraft comes in for a landing on the desert plain outside the town. Imperial entanglements!

Reaching the hangar bay, the adventurers find themselves up against another couple of rusty droids, with the equally rusty shape of an old freighter tantalisingly close beyond them. These droids are easier to fool however, and let the group through after a hypermatter reactor igniter is waved in their faces and they’re told it’s being delivered to Trex. Once inside the hangar however, they encounter the truculent Trandoshan, who isn’t falling for any hackneyed stories and immediately reaches for his blaster. Lowhhrick starts laying into him with his vibro-axe, shouting some long-winded story about what Trandoshans did to his family, which unfortunately to everyone else just sounds like “rrrooooaaaahhhhhh!!!!” Trex, especially, objects that he doesn’t speak wookie as this mad hairy wookie loonie hacks into him with an axe. He backs away, blasting as he does so, but Lowhhrick isn’t taking “frak off!!” for an answer. The droids join in and there is a flurry of blaster shots, but eventually Trex lies in two messy pieces, the droids are in multiple sparking and popping pieces, and Lowhhrick is covered with even more sticky blood.

…Lowhhrick isn’t taking “frak off!!” for an answer

The party scatters to check out the ship, the service entrance and the control centre. 41-VEX notices the front doors are still open; then she (he? it?) notices that three imperial stormtroopers are walking down the street outside towards the hangar bay. She pretends to fiddle with the control panel and closes the doors, just as the stormtroopers break into a run. Oskara attempts to find the freighter authorisation codes in the control centre computer, and then in the ship’s computer, both with no success.

The stormtroopers open the doors and run in firing blasters. Pash runs over to the control centre and connects to spaceport control, fumbling through an unconvincing attempt to get the landing clamps disengaged. Eventually in response to a request for the code he shouts “swordfish!” and on his next check, rolls a triumph result. “Roger that” says spaceport control and the clamps disengage. Meanwhile Oskara heads for the ship’s ventral laser cannon turret, and starts opening fire with the lasers on the stormtroopers , making a lot of noise and causing a lot of damage but not actually hitting anything. The stormtroopers fire frantically at the freighter as the team gets into their positions and the Krayt Fang takes off, accelerating into the Tatooine sky with blaster shots criss-crossing in its wake.

Lowhhrick is in the dorsal laser cannon turret and Oskara in the ventral, 41-VEX takes engineering, and Pash has the pilot seat. As the sky darkens and they hit space, two Imperial TIE fighters scream by, firing their linked lasers. Pash executes evasive maneuvers as Lowhhrick and Oskara lay down fire with the ship’s cannons. Oskara is in brilliant form, knocking out two ships—and when another two arrive, one more—in quick succession. 41-VEX installs the hypermatter reactor ignitor and boots it up, then begins repairing some of the hull damage caused by several laser fire hits. After one particularly damaging hit, Oskara’s gun powers down, and it’s all up to Lowhhrick, who so far has been missing repeatedly. He aims, fires—and hits! The last TIE fighter is destroyed. Pash slams the button for hyperspace and the freighter and its new crew shoot into the tunnel of bright white star trails—and freedom!

At least for now.

My opinion of the Star Wars: Edge of the Empire Beginner Game? I initially had some reservations about the whole ‘Beginner Game’ concept, seeing it as a cynical cash grab targeted at completist fans, but I feel completely differently about it now. You can get a good feel for the new roleplaying system and decide whether you want to commit more money and resources into it; and in any case you’ll be getting an evening’s worth of excellent entertainment for the price of a movie and a few drinks. The production is exceptional, and the whole package is designed to get you up and running with minimal effort—in fact, I first ran this adventure without reading it beforehand. Sure, the adventure is basic, but it’s perfect for beginners to roleplaying games, and any GM worth his or her salt can flesh it out a little during play and turn it into a satisfying session.

A big thumbs up from me. We’re still debating about whether to buy the core book and start a campaign, but in any case much fun was had by all. The force is strong with this one.