Bikers and boardgames: biffo or brain? The Sons of Anarchy: Men of Mayhem review. 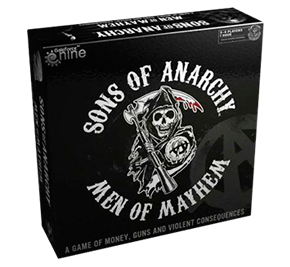 No ne would have pegged the US TV series Sons of Anarchy as an obvious thematic subject for a boardgame, but Gale Force Nine continues to surprise with their choice of licences from different genres (their latest is Homeland, their next is Family Guy). And of course now I think about it, rival ‘motorcycle club’ gangs fighting for territory, guns and drugs is the perfect concept to wrap an area control and resource management game around. GF9 was clever in that they not only thought of it first, but they’ve applied the licence in an inclusive way. But is the game as different as its theme? Rev your engines, open your throttles and let’s find out.

Firstly, and importantly, the locations players and their gangs fight over are represented by tiles that look and feel like beer coasters. This is brilliant. It’s the kind of thoughtful design I love, and a creative approach that has yet to be satisfactorily explored in boardgames: meshing the tactility of a game element perfectly with the theme. There are 24 of them, and you’ll only be using 11 in a game (5 of which are standard starting locations), so the feel of the game can change quite dramatically depending on which ones are randomly drawn. Each player chooses a clubhouse (eg. The One Niners, the Lin Syndicate, SAMCRO)—each of which has special rules to give it a distinctive feel—a matching player card and screen, and the indicated amounts of starting cash, guns, contraband, members, prospects and heat. The guns and contraband are fantastic little plastic sculpts, the latter a bulging duffle bag no doubt packed with extra-large gobstoppers, out-of-print comics and those fireworks that shoot balls that you can’t get anymore. Or perhaps drugs. Members are plastic hairy guys on motorbikes, prospects are laid-back dudes in hoodies. The plastic in this game is spot-on theme. 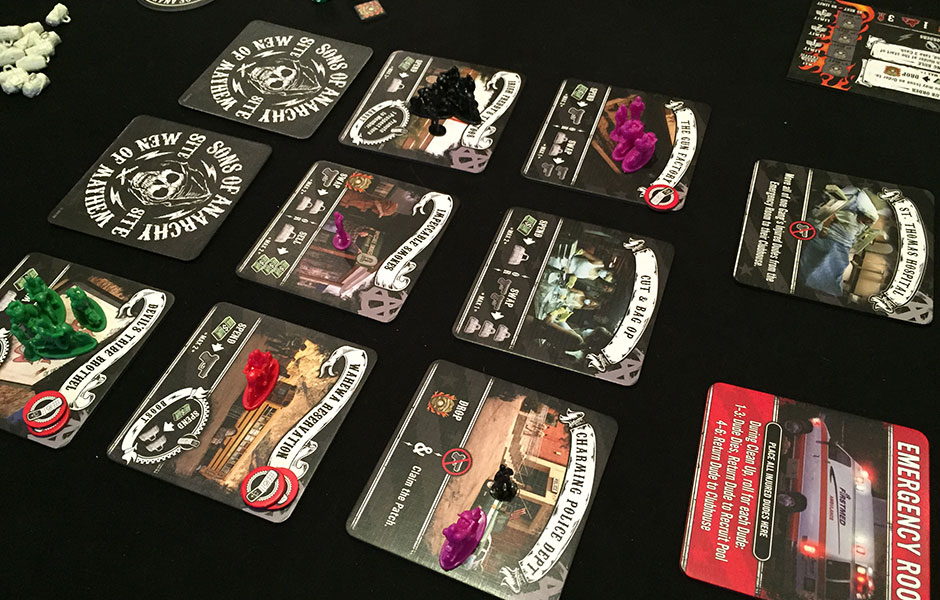 Game play is pretty straightforward. Each round, each player gets a number of order tokens equal to the number of members in their gang plus a base number depending on their club. Two facedown sites are revealed (if any remain facedown), then an Anarchy card is revealed. These can have instant effects, add new rules for that round, or even act as temporary locations themselves. Then players take turns issuing orders, expending a token every time they do so. You can move your dudes between locations, use (‘exploit’) a location if you control it, issue a ‘throwdown’ to fight another gang at a location, recruit a new prospect, or convert a prospect to a full member (which will give you an extra order token next turn).

Next, players can traffic their contraband on the black market. The amount of guns and contraband you have is hidden behind your screen, so everyone secretly chooses the number of duffle bag pieces they want to sell and they’re simultaneously revealed. However, everyone who takes part gets 1 heat token, and the more people who take part, the lower the selling price of everyone’s contraband.

Your heat rises the more you sell contraband, and not only does this limit the amount you can sell, but if exceeds 4 tokens a member of your gang has to take the fall. Whoops, sorry about that mate. Take one for the team …

Apart from a clean up phase, that’s about it. So what do you get when your dudes exploit the Adult Video Emporium or The Gun Factory? It varies, from selling guns or contraband for cash, buying them, trading them, getting any of that good stuff for free, gaining or losing heat, or even stealing stuff from a rival gang.

Of course there are always a few locations everyone wants to park their motorcycles outside, and that’s when things can get a little ugly. If you issue a throwdown order, everyone first gets a chance to call for backup if they expend one or more order tokens to bring over some dudes from other locations. Then the participants decide how serious the fight is going to get, by secretly choosing a number of guns and simultaneously revealing them. Bringing guns to a fight certainly ups the odds in your favour, but you gain a heat token for doing so, and at the end of the fight every gun used sends a rival dude to the Emergency Room (where they have a 50% chance of recovering at the end of the round). A simply dice roll-off decides the winner, with +1 per prospect, +2 per member, and +3 per gun modifiers. The winner gets the location and the losers ride back off to their clubhouse like the squawking little chickens they are.

The Anarchy cards are the game’s timer, and like the location tiles, the deck varies from game to game as there are 36 cards and you only need 15 per game. When the last card is drawn it’s the final round. Who wins? The player with the most money of course! None of that namby-pamby victory point business here!

…throwdowns can be bloody beat-ups for all the parties involved

SOA: MOM (hmm, that acronym doesn’t quite work does it?) is a tight, well-made, well-designed area control game that works, but how much fun you’ll have may depend on your players. As in Spartacus, deal-making, manipulation and table-talking is actively encouraged, and this is where the game definitely comes into its own, as you extort a few bucks from another player in return for not contesting their location, or trade some contraband for guns only to use those guns on them when you go back on the deal. The only problem I have with the game is that if your players just want to play it ‘as is’ and not get into the deal-making, things can get a little dry. This isn’t helped by the fact that throwdowns can be bloody beat-ups for all the parties involved. Since every gun brought to a fight injures a dude, you can attack in strength but still lose several valuable gang members. Sure, you’ll have prospects with you to take the hits, but those prospects have to be recruited again before they can become full members (and thus add those all-important order tokens), so losing a few guys can quickly put you behind. So the game doesn’t encourage you to contest locations; in fact, if everyone decides to play nice you can all happily exploit your chosen sites without much conflict, leading to a slightly dull game. It leaves me feeling that throwdowns should involve less risk and more reward for the aggressor, rather than encouraging conservative play.

Unlike Firefly: The Game or Spartacus, there are no named characters here. In fact, apart from the names of the motorcycle clubs and the cast photos on the box sides, this really could be a game about any bikers battling it out for territory. This cleverly makes the theme accessible to any player, and it doesn’t require that the players have any previous knowledge of the show—in fact I’ve never watched it and I don’t think that detracted from my experience of the game at all. GF9 have not only made a game for fans of the TV series, but one with a generic theme that you don’t have to be a fan to enjoy—and of course, they get a whole lot of ready-made imagery with the licence. Similarly, their new game Homeland is more about modern espionage and terrorism than a specific simulation of the events of that show.

It’s a difficult design challenge, but Sons of Anarchy: Men of Mayhem gets close to meeting it, and Gale Force Nine get closer and closer with every game they make.

Get the Sons of Anarchy: Men of Mayhem Rules Summary & Reference

Gale Force NineSons of Anarchy
Sign up for the newsletter