War of the Ring v3

War of the Ring. What a game. What an epic, incredible game. If you had to hold me down and force me to name my favourite boardgame, after some struggling, pleading and possibly whining in a small girly voice I would eventually admit that game is War of the Ring. After all, I spent [actual amount deleted because I keep trying to block it out] on the Collector’s Edition, one of my most prized possessions and something I plan to display in a position of honour one day when I finally get that comfortable high-ceilinged Victorian library lined with multi-level bookshelves and one of those metal spiral staircases that moves around the circumference of the room so I can access the books on the higher shelves … 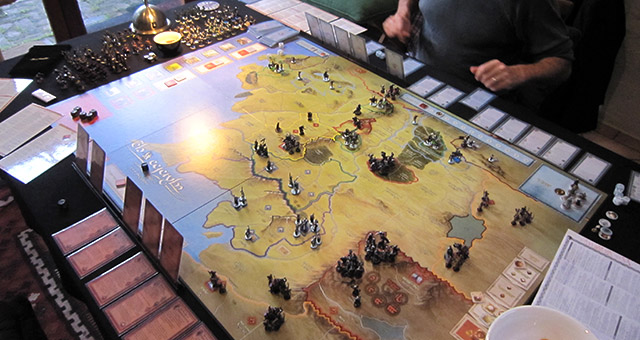 That’s a friend and I playing the Collector’s Edition, in the photo above. Isn’t it a thing of beauty?

It took me countless hours to create the first set of rules summaries and reference sheets for War of the Ring, since it was notorious for rules ambiguities and complexity. Now I’ve finally had the time, in response to numerous requests, to update these sheets for the Second Edition of the game, and I’ve included the rules from Lords of Middle-earth, the expansion. The rulebook is far better written, but I still had to go through and pretty much do this from scratch in case I left in any old rules.

Hopefully these sheets will make your next epic game of War of the Ring play even faster and smoother—if you discover any errors or have any suggestions, as always, let me know.

It’s time to do battle for the Third Age!

Get the War of the Ring Rules Summary & Reference