Wrath of Kings: Building and Basing 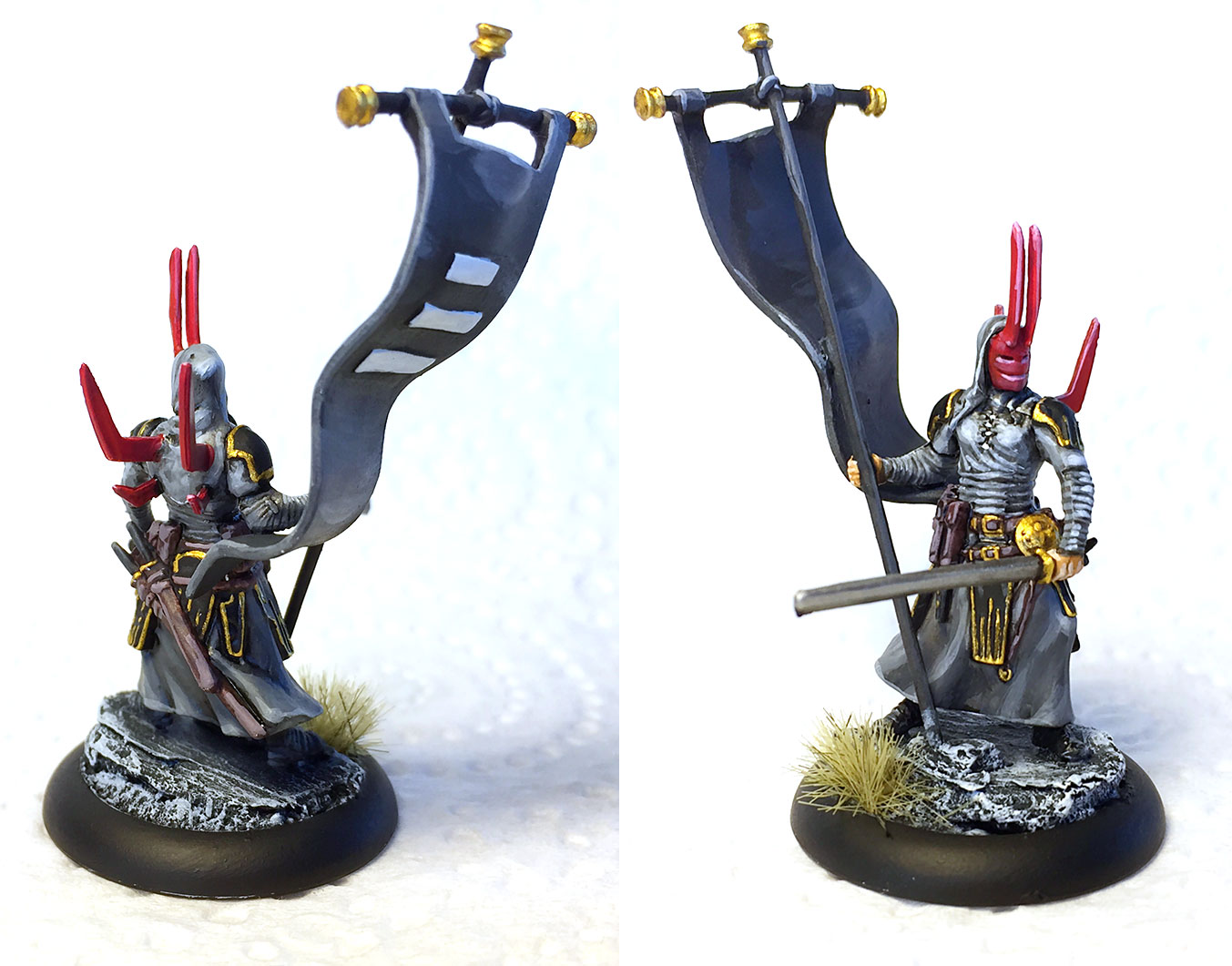 Women and children knew deep in themselves that no misfortune was too great to bear if their men were whole.

There’s a lot of disassembled plastic people in your possession if you backed Wrath of Kings. Here’s how to put them together and base them.

So, you’ve finally received your Wrath of Kings box of goodies, you’ve checked out the hundreds of baggies full of bits of plastic, and now you’re thinking, whew, what do I do know? Never fear, the EOG is here, with this handy visual guide to prepping and basing your miniatures. Put on a good audiobook or some music, because it’s going to be somewhat of a long haul building ’em all …

… or, do as I’m doing, find a friend who also backed the game, and decide on a faction each to build and paint. That way you won’t be confronted with quite such a mammoth task all in one go, and you’ll have two painted factions ready to slug it out on the tabletop in no time.

No remember, this is just how I’m doing my bases. There are many different methods and approaches, and no right or wrong way to do things; though whatever you choose to do you may find some useful tips below.

First, get organised. I found it useful to actually write on the bags what figure was what, but in in any case organise your figures so you can identify them by comparing the components to the illustrations on the unit cards or box backs. 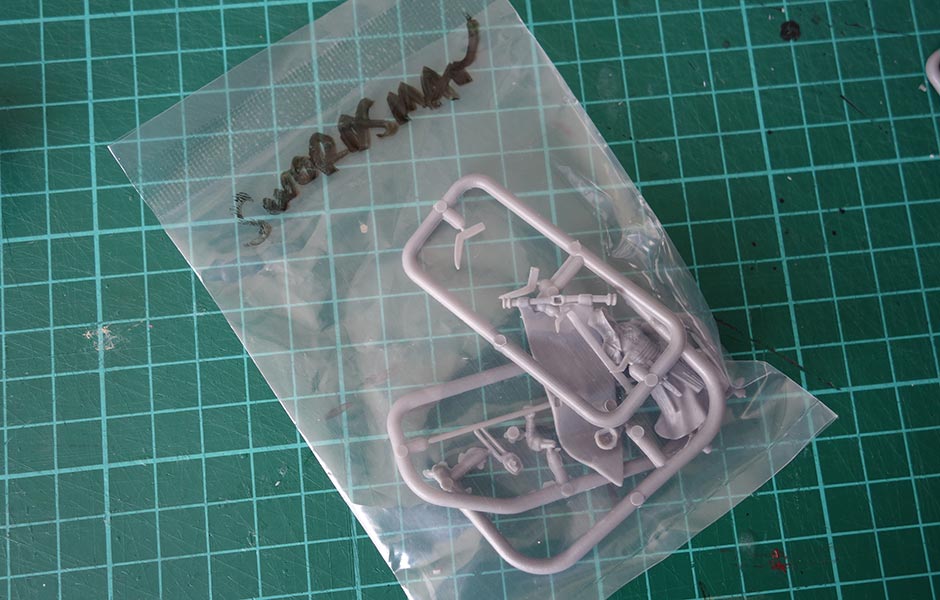 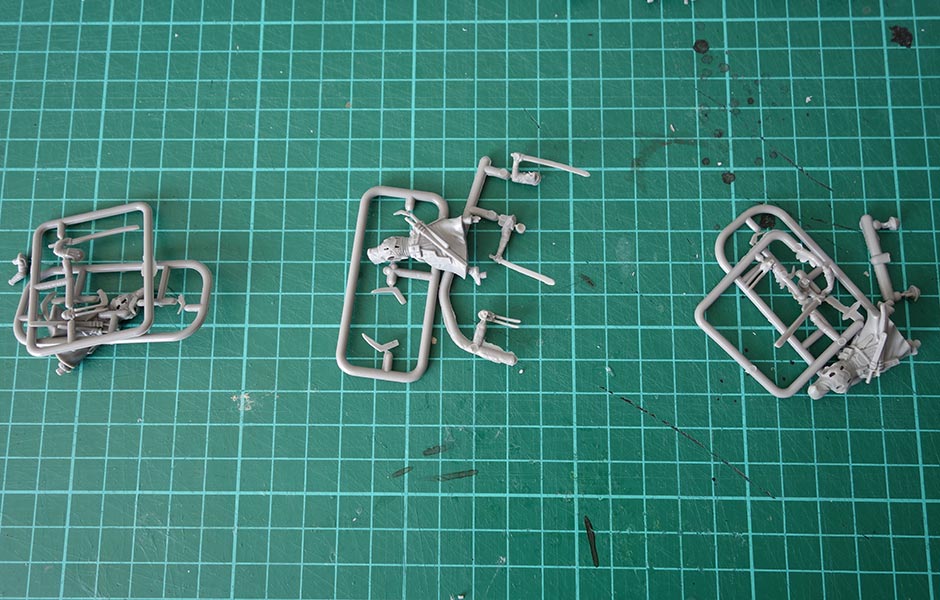 Put a fresh scalpel blade in your scalpel holder (as always, watch those fingers), and carefully cut the pieces from the sprues. Also cut off any plastic nubbins from the molding process. If you can prefer you can use plastic clippers, but I find this method a bit more precise. 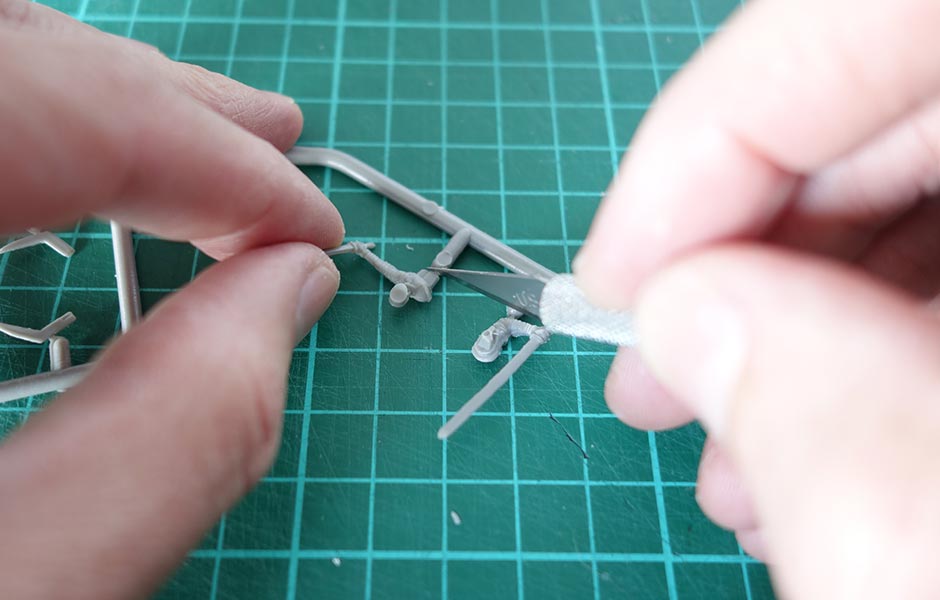 Using your very sharp blade, carefully shave and/or scrape off any mold lines. You can do this before or after the figures are built; I prefer to do it before. 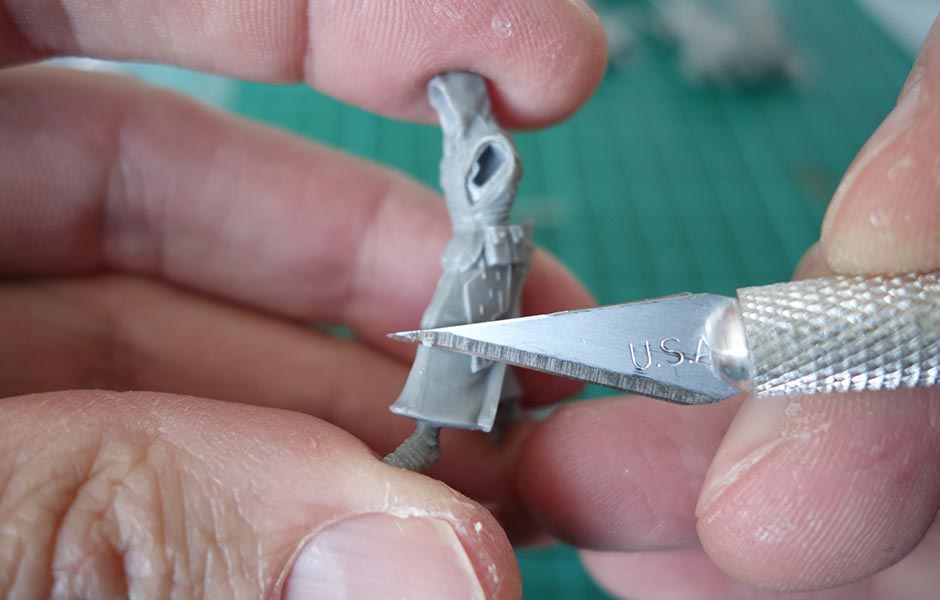 Do a ‘dry’ test fit of the pieces and make sure everything fits well. You may have to scrap off bits, or even, in extreme cases, cut off the lug; but these figures are well made and in most cases they should fit together easily. Squirt a little bit of super glue in the join… 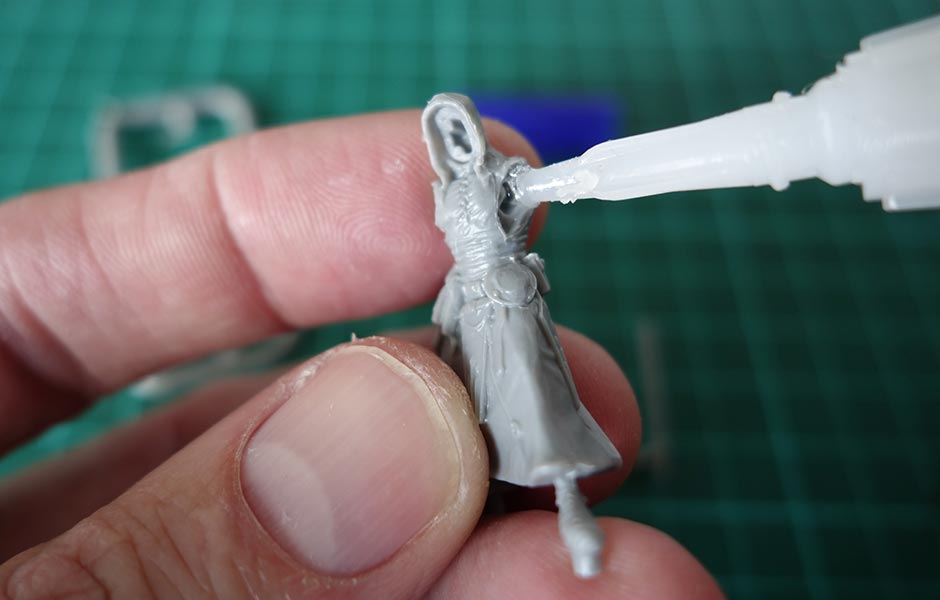 …and press the pieces together until the glue sets. Makes sure your fingers aren’t becoming a permanent part of the figure as well! 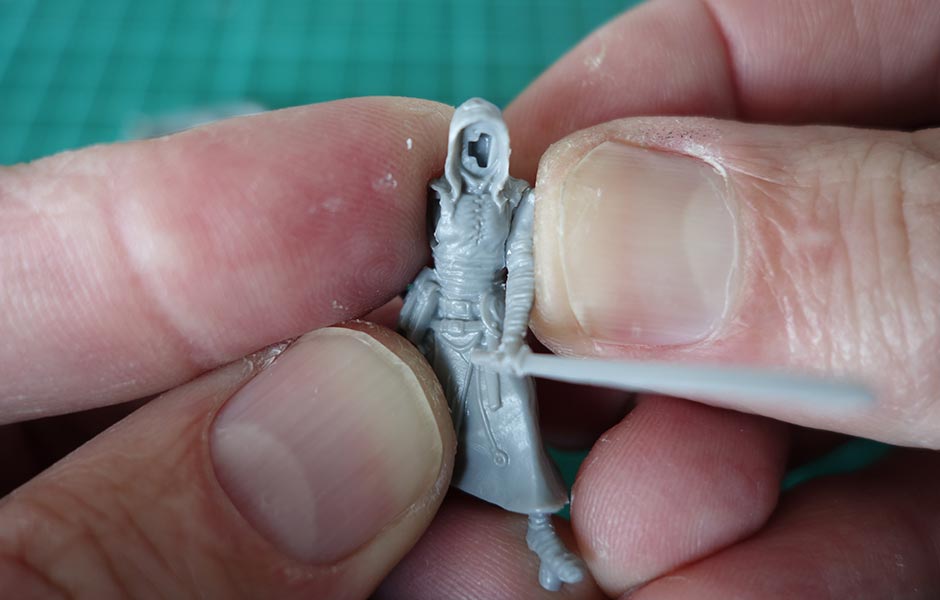 You may need to use tweezers to attach those especially fiddly bits, but make sure those tiny bits of plastic don’t go flying off into the carpet to be lost forever. 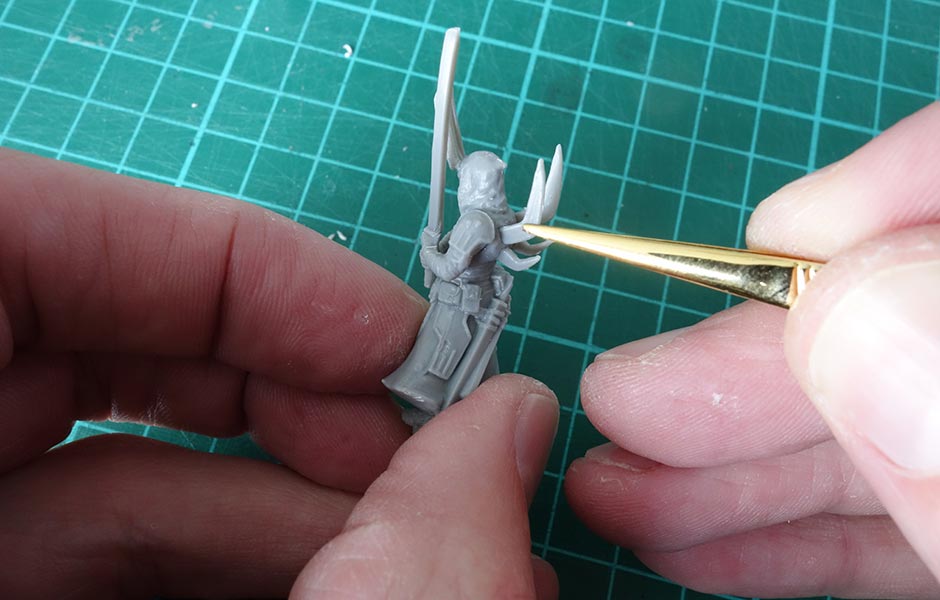 Before long, you’ll have a bunch of assembled figure ready for basing. Now at this stage—after they’re completely dry of course—you can give them a wash in water and a bit of detergent, to clean off any residue left over from the casting process. See my miniature painting videos for more details. Some people say this step isn’t necessary, but I have come across figures that definitely have a residue that impedes the adhesion of paint, so I’m in the habit of washing all my plastic miniatures. 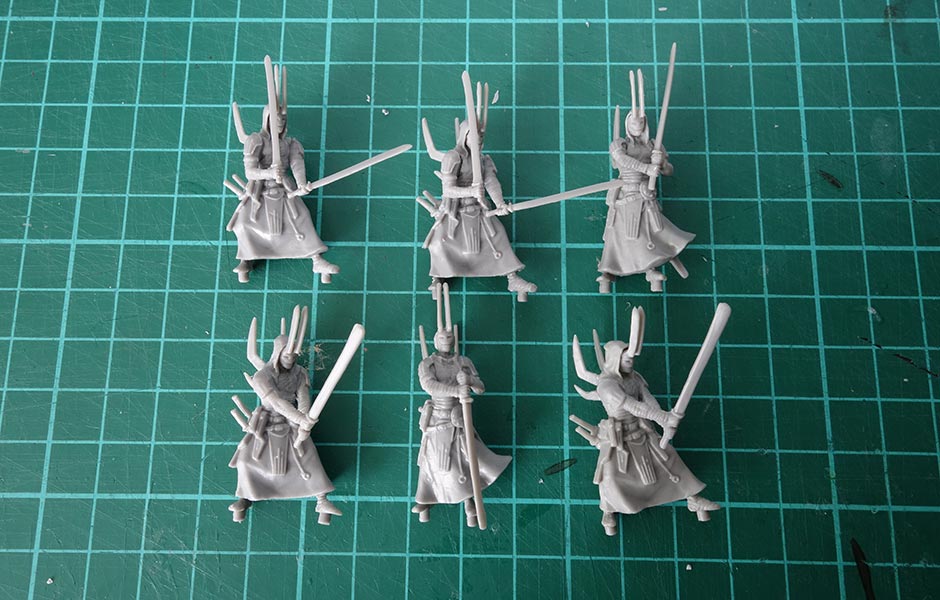 Now it’s time for a trip to the hardware store to pick up a few things. A bag of bark (though I had a facepalm moment when I later realised out backyard flowerbeds are full of exactly this type of bark). A small mortar and pestle to ground up some clay kitty litter. A 2mm drill bit. More super glue. Gap filler. And some gel glue that I haven’t ended up using yet. 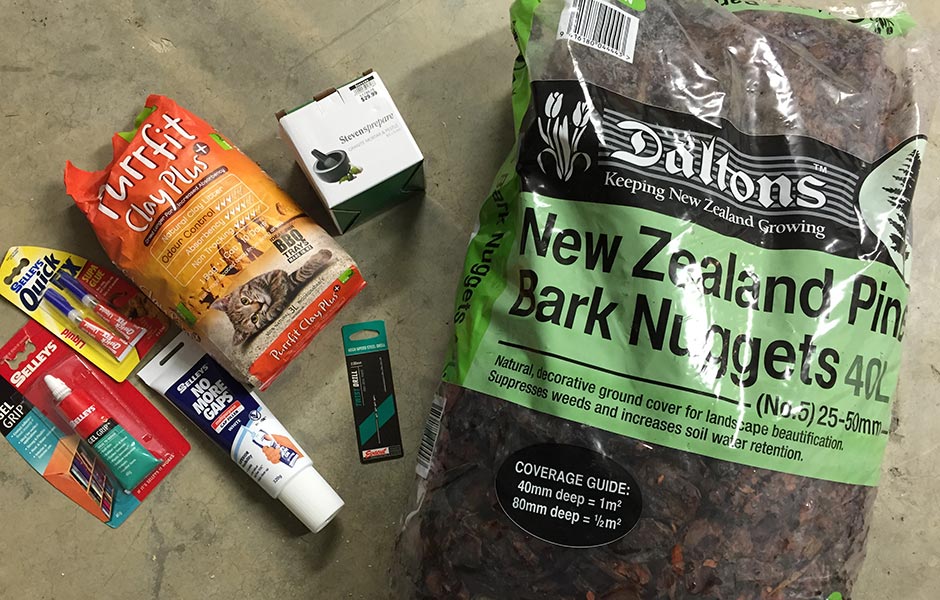 Ground up kitty litter is great for basing, because you get a range of irregular sizes from fine sand to rocks. You can choose the effect you like. 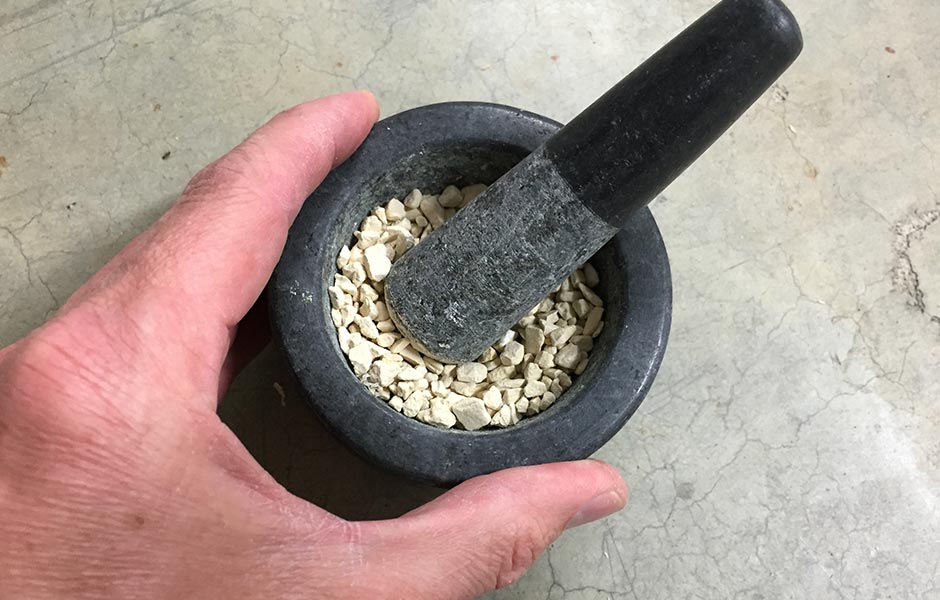 Notice the range of grit! 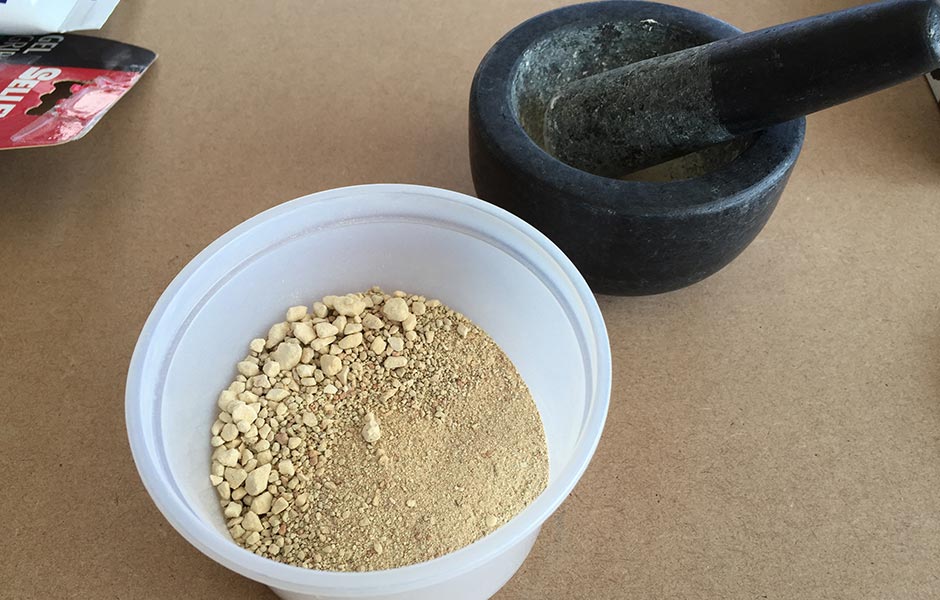 In some most cases—especially for rank-and-file miniatures—I’ll just have a plain textured effect on the base. But for many of the ‘special’ figures I’d like something a bit more dramatic. Hence the bark. 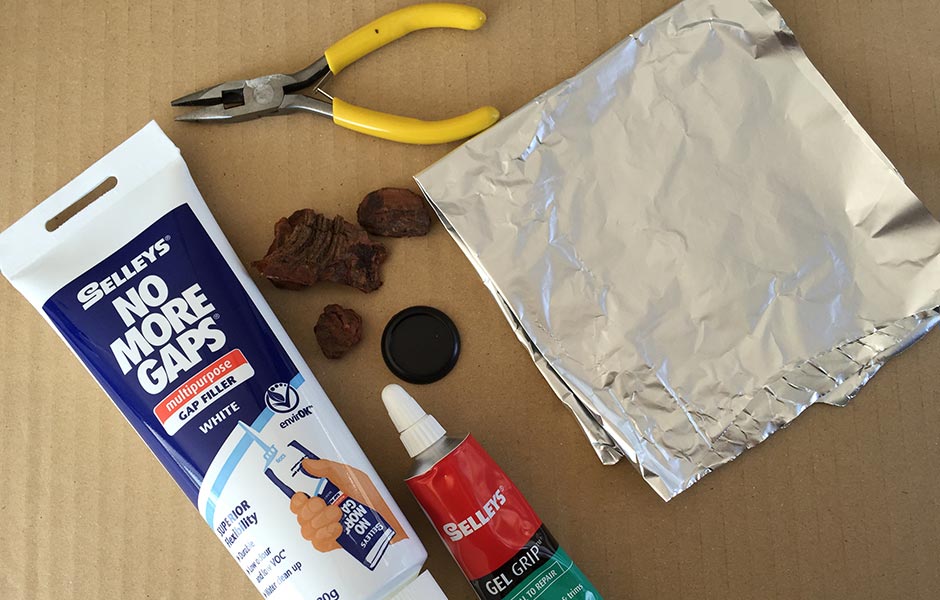 You can use a pair of small pliers to pull off bits of bark and roughly shape them. If a piece is too high, use a large craft knife to carefully cut it down to size. 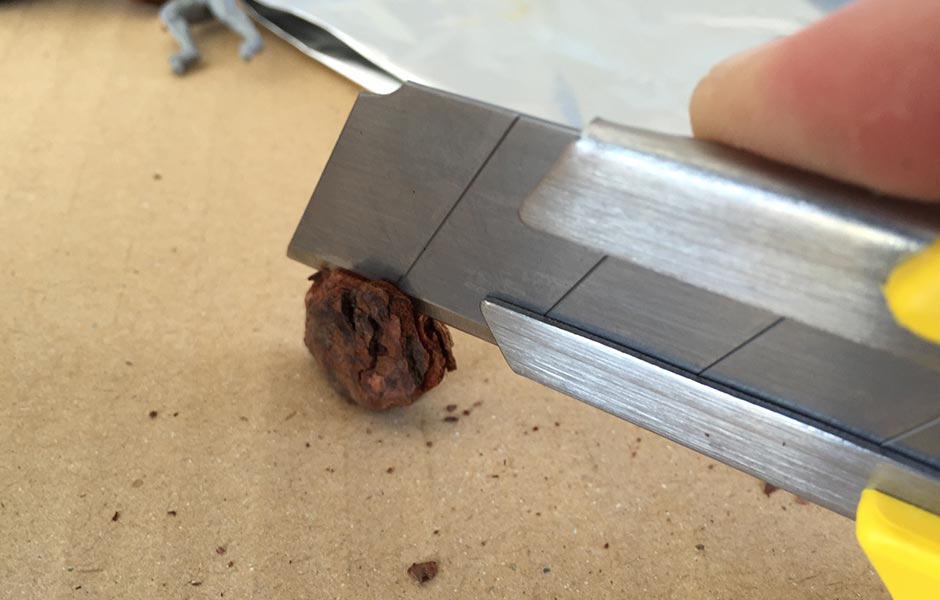 While, you’re working, keep experimenting with how the bark looks in proportion to the figure. You don’t want it to dominate the miniature too much. 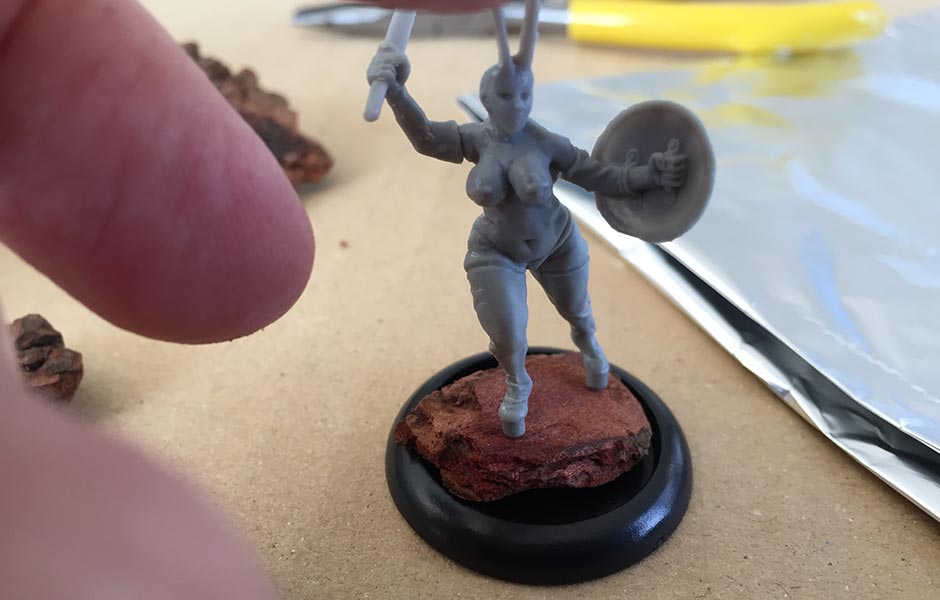 Now let’s fill our base. I like storing my miniatures in a metal toolbox, so I’m super gluing a couple of 6×1.5mm rare earth magnets in the base. I’m still experimenting with exactly the right level of ‘pull’, and have ordered some larger 10x2mm magnets to use one per base. I later discovered these are too strong and my figures were pushing away from each other when they were base to base, so I’m still trying to find the right size! 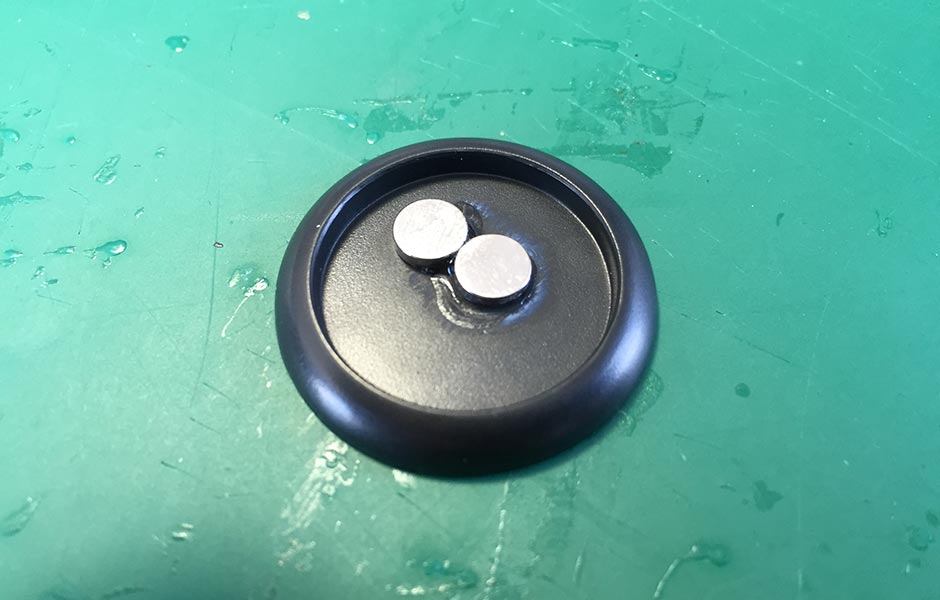 Time to entomb those magnets in gap filler for evermore! Carefully squeeze in some gapfiller… 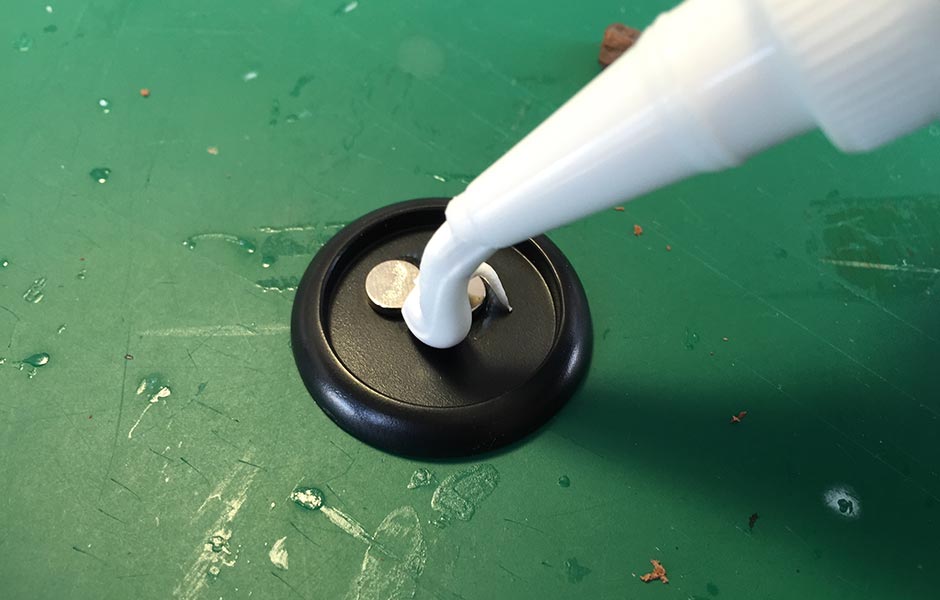 And use a finger dipped in water to smooth it out. Use just a bit more than you think you need, because gap filler shrinks a bit when it dries. 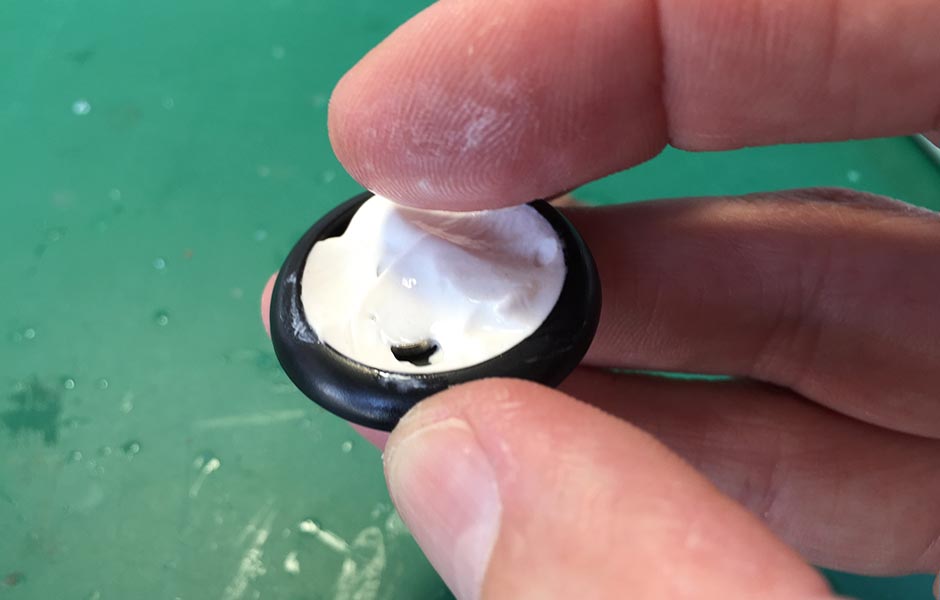 As I mentioned, for the basic figures, I’ll be covering this layer of gap filler with a layer of my ground-up kitty litter. For now, I’ve stuck the figure directly into the half-dry gap filler. 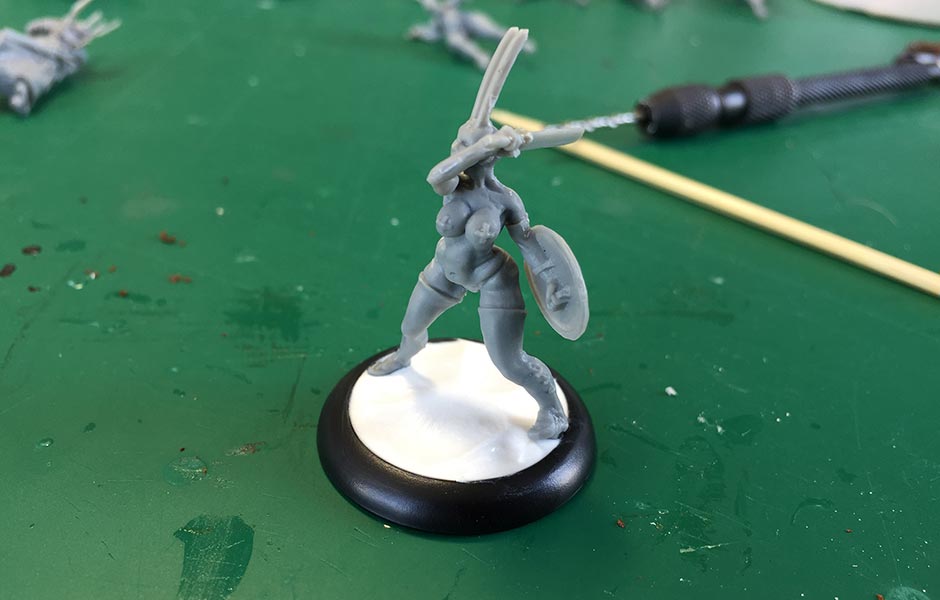 But for the more elaborate bases, I place the bit of bark on top of the gap filler. I planned to use the gel glue to attach the bark to the dry filler, but it seems to stick to the wet gap filler pretty well. Make sure you leave it overnight to dry though. I may have to do some tests when I get stronger magnets to ensure that this all stays together without glue; for now it seems fine. 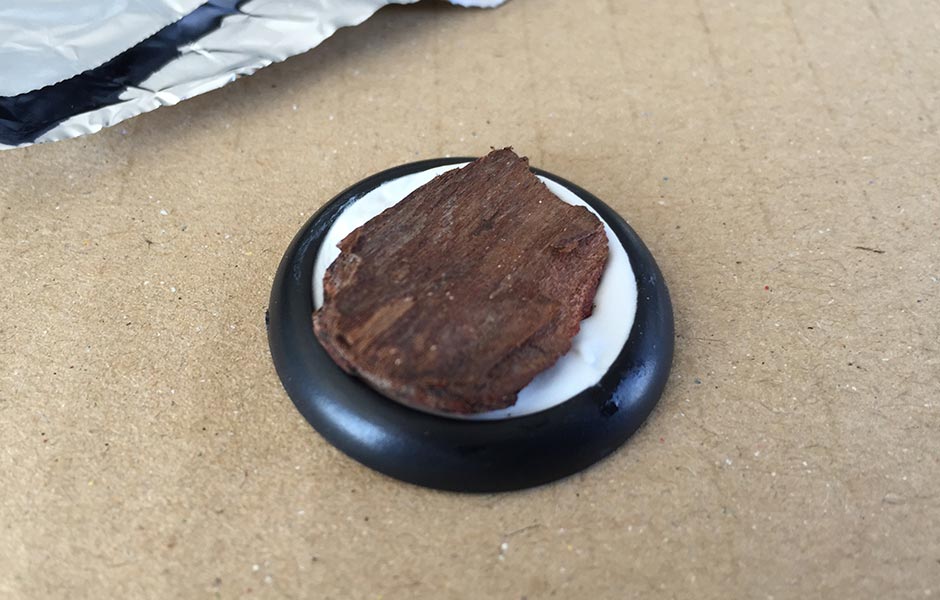 As for attaching the figure itself, carefully pose it on the bark and note where the pegs go. If you want to be more precise, you can dip the pegs in paint and stand the figure on the bark, thus leaving little paint dots where you have to drill. Use your pin vice (or pin vise of you prefer) to drill the small holes by hand. 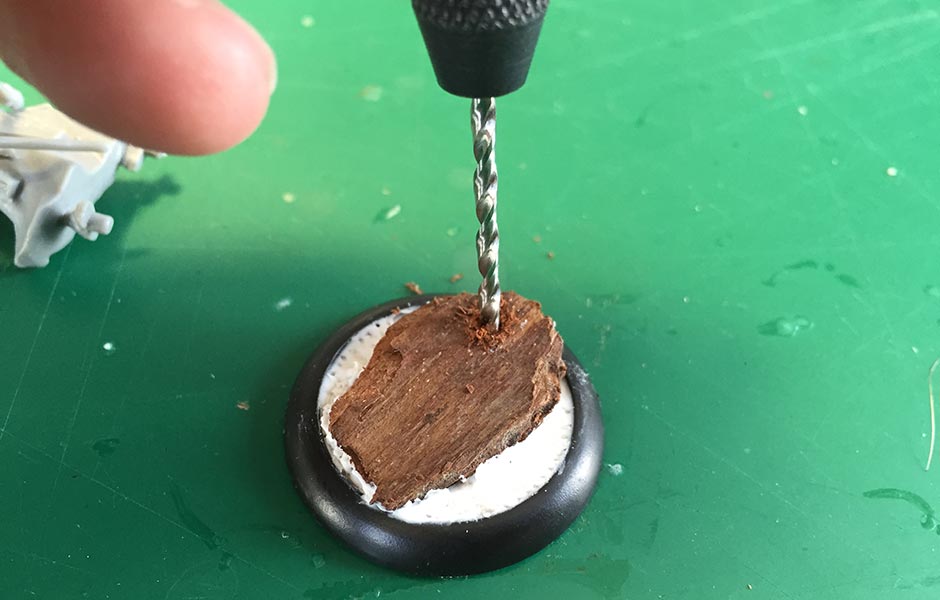 To texture the gap filler, either on a simple base or a more elaborate one like this, paint some white glue on the gap filler with an old brush… 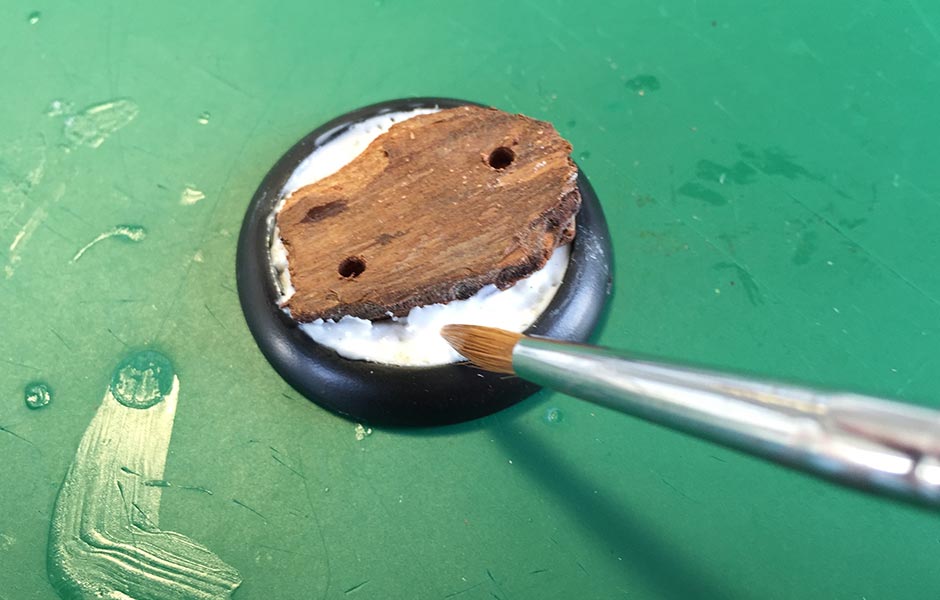 …and sprinkle your ground-up clay litter on it to texture it. Clean off any texturing that gets on the bark/rock or the lip of the base. 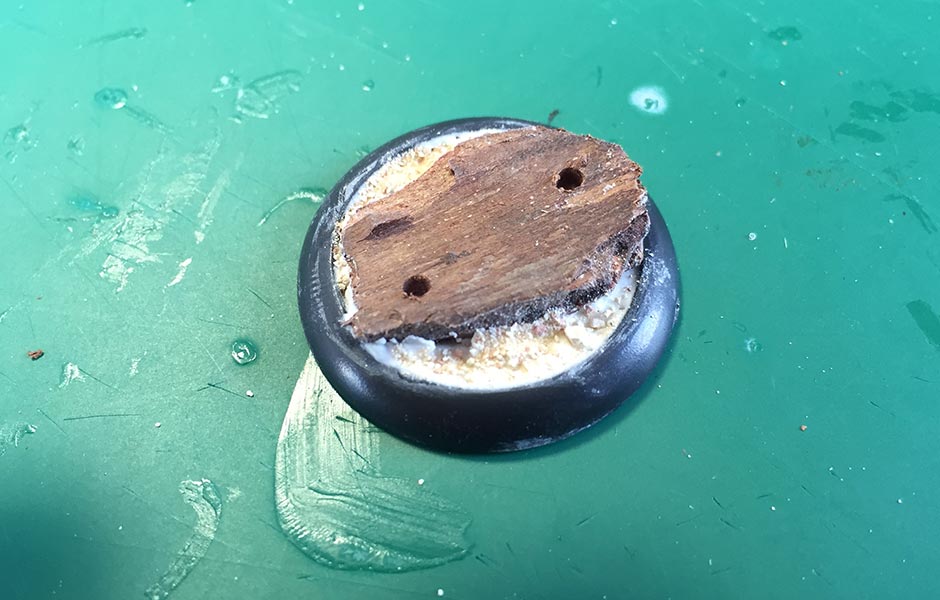 Finally, super glue your figure to the base. Voila! Your first completed miniature! Only about 219 to go! 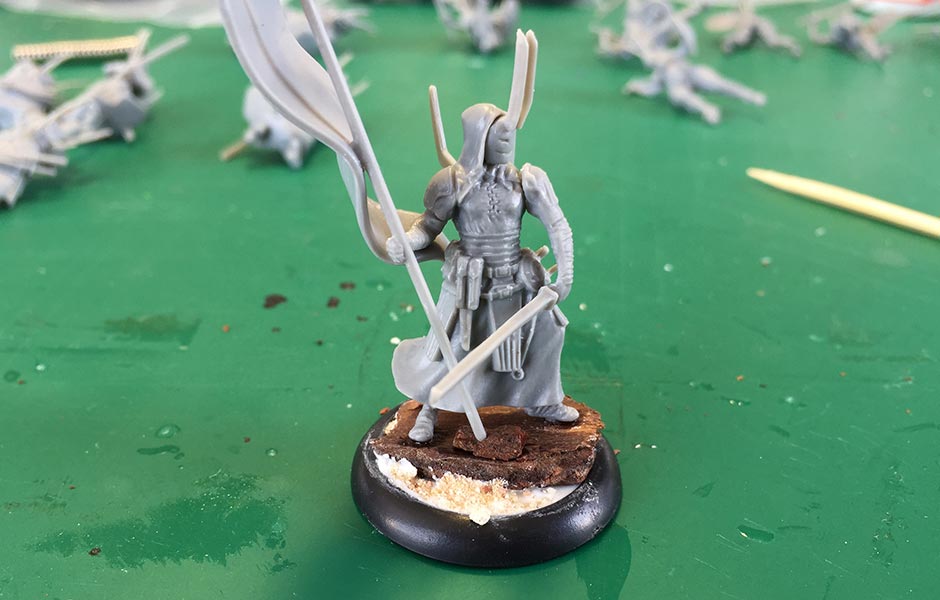 You can see the painted result at the top of this page. But for now, get building and basing, you’ve plenty of work to do and those miniatures won’t build themselves!

Cool Mini or NotminiaturesWrath of Kings
Sign up for the newsletter