Who will control the destiny of the American Frontier?

Games designer Corey Konieczka created or contributed to an incredible number of games during his dozen or so years with Fantasy Flight Games – classics such as Battlestar Galactica, Gears of War, and Star Wars: Rebellion. But a couple of years ago he left FFG and started his own studio, Unexpected Games, who recently sent me all three games they’ve produced so far. And it’s a really interesting range of different game experiences.

I’ll be covering The Initiative and Voices In My Head soon, but let’s kick things off with their most recent release, 3000 Scoundrels. This relatively light and fun game of tableau building and point scoring, set in a scifi-meets Wild West milieu, centres on a big gimmick, but it’s a good one – by randomly putting together cards and printed sleeves, there are 3000 different combinations of characters and their special abilities to ‘hire’, as you attempt to lay claim to the safes full of future tech that are worth the most victory points. Sure, there’s a bit of mucking about sleeving a card each turn, and unsleeving them all when you pack up, but it’s not too onerous. I do wonder if a normal large pack of cards would have been just as effective, and maybe even allow players to get to know a number of repeatable combos, but that’s a small quibble – and let’s face it, 100 Scoundrels doesn’t sound quite as interesting does it?

Check out my video review in which I talk in more detail about the game, then download my free rules & reference. Saddle up pardner! 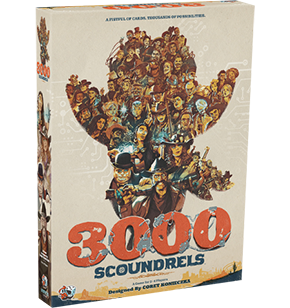