Deception and betrayal at the cold edge of space

If you’re a fan of the hidden traitor mechanic used most famously in Battlestar Galactica, you’ll probably enjoy Dark Moon, originally created as a print-and-play dice-based, faster version of that game. Instead of traitorous Cylons, the bad guys are those crewmembers of a moon outpost infected by an alien virus; and their sole purpose seems to be exposing everyone to the cold vastness of space. Armed only with the positive modifiers on a bunch of dice and a very suspicious attitude, you must survive!

Dark Moon is a lot of fun and doesn’t outstay its welcome; and it’s especially enjoyable if you have enough players to have two infected players. Cleverly, players roll their dice behind screens, so when you submit your dice to stop the station’s shields from malfunctioning or the life support shutting down, no one can be sure if you’re the infected throwing a spanner in the works or just the victim of a bad dice roll. Cue accusations flying across the table and desperate voting in an attempt to throw the suspicious player into quarantine!

The graphic design is wonderful, cleverly evoking the low-tech feel of films such as Alien and The Thing—in fact you’ll find yourself recreating the group paranoia of the latter film especially. 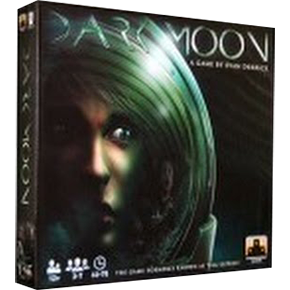