An evil lord controls the dungeon in which the rest of the players fight monsters and gain treasure.

Dark World was Waddingtons’ early 90s foray into the Heroquest market, and they followed the same formula: lots of plastic and simple gameplay. The core game and the two expansions, Dragon’s Gate and Village of Fear, are pretty bad game-wise, but there’s some great plastic bits, especially in the spectacular Village. This rules summary is for the core game and the Village of Fear expansion. 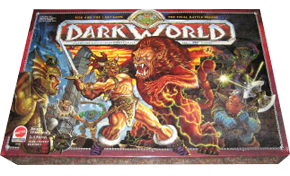