The deeds of the chosen few will be a testament to the will and strength of the mortal.

Armed with their ingenious Scan&Play system, Lucky Duck Games have been pushing at the boundaries of blending boardgames and apps for a while now, and they’ve hit a new high with new game Destinies. Originally envisioned as linking with the Time of Legends: Joan of Arc universe created by Mythic Games, that company had a bit of a dispute with their game designer Pascal Bernard, so Destinies has dropped the Time of Legends tag and now stands alone. Not that it appears to have made any difference apart from the fact we perhaps missed out on a few cards which would allow us to use some of these great little miniatures in the other game.

I’ve been playing a few story games recently and didn’t set my expectations too high, but after a couple of games Destinies has become one of my favourites in the genre. The game is beautifully produced, the stories are well-written, and the dash of competitiveness really adds spice to the proceedings (personally, I’m getting a bit tired of all these co-op games in which “we’re all winners!”) Your character has a choice of two destinies to pursue, and the ability to be able to change your mind at any time once you start seeing what your opponent is doing gives the story a real sense of urgency and realism—and it’s just great fun racing to fulfil your destiny first!

The app is really nicely made too, which is essential for the success of a game like this. In fact no expense seems to have been spared in the making of Destinies and its expansions, even down to the beautifully designed plastic game inserts. It’s incredibly quick and easy to scan your sword card to attack an enemy, or your to ask the innkeeper about your talisman by scanning it. And not only is the app great, but there’s a clever little system of multiple skill counters on your player board tracks that affords interesting decisions about how you advance your abilities to beat skill tests.

Once you get started you’ll hardly need a rules summary, but this one should be handy for when you’re first playing it or coming back to it after a break. Good luck fulfilling your destiny! 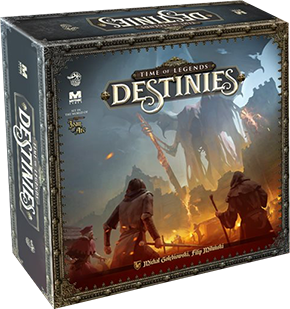