Diamant takes you on an expedition in the Tacora Cave, known for its diamonds… but also for its formidable traps!

This simple but very fun little push-your-luck game has been around since 2006, and gone through several versions and multiple publishers. I originally purchased it as Incan Gold, but was always frustrated by the poor quality of that version. Thankfully, Iello released this gorgeous version recently and it’s the nicest yet. There’s really no comparison between the folded card of Incan Gold and the beautifully made cardboard chests of this release – not to mention the gorgeous rubies and diamonds!

Really, the rules are so simple the game doesn’t really need a summary, but I made one anyway for those times when you want to quickly remind yourself of how the game plays without flipping through the rulebook. 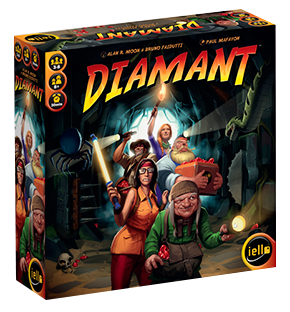