Take the role of the 11th Doctor and his companions vs. the Weeping Angels.

After posting Pathfinder: Level 20 yesterday, here’s my summary for the other small-box game Gale Force Nine has brought us recently: Doctor Who: Don’t Blink. They both share a focus on movement planning, though this one is a more competitive and intense beast.

For me, that makes it less entertaining that Level 20, but that may be because of a personal lack of interest in the more puzzle-like approach of this game. Based on the well-known Matt Smith Doctor Who episode about the creepy Weeping Angels, there’s little room for error here as the Angels are controlled by a player, you don’t know which of them can eliminate you from the game, and they’re a lot faster than the Doctor and his companions. Of course, you’re safe if you don’t blink, and this crucial thematic element is cleverly represented by a deck of ‘blink’ and ‘don’t blink’ cards, one of which is assigned to each hero per turn. The problem is, the ‘don’t blink’ cards go into the discard pile while the ‘blink’ cards go back in your deck, so it gets harder to keep those statues in your line of sight as the game progresses and you try to retrieve the parts necessary to repair the Tardis and escape.

I didn’t enjoy this game as much as Level 20 as I found the number of variables too great and the amount of planning required to be frustrating, but again, that’s just because I prefer more fast-moving and fun games. I imagine for the right audience this would be an challenging, interesting puzzle, and despite the player elimination, it’s probably far more suited to multiple players rather than two.

For more information, check out my detailed video review of this and Pathfinder: Level 20. 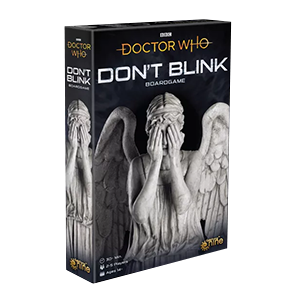