Duel in the Dark

Plan the attacks on Germany to undermine civilian morale, and organize an effective civil defense.

This clever game simulates the British nighttime bombing raids on German cities during WWII, but not in a ‘traditional’ wargaming fashion. The expansion Baby Blitz explores the Luftwaffe raids on London and western England. Duel in the Dark is more a strategic boardgame than a wargame, as you win by scoring victory points either by successfully completing your secretly plotted bombing runs or strategically placing civil defences such as flak and floodlights to thwart them. The detail in this game is incredible and it’s a very unique gaming experience. 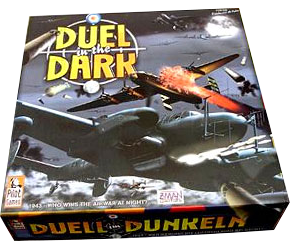