Although Games Workshop gets the lion’s share of players and revenue, there are some comparatively unknown games doing far more interesting things – and for my money, more fun things – in the tabletop miniatures wargame space. Gaslands, Moonstone, and Stargrave are just some I’ve highly enjoyed in the past few years. And now I think I’m putting The Drowned Earth at the top of my personal list.

Now they’re all fun games in their way, but TDE really does hit that sweet spot for theme, level of complexity, variety of choices, and ease of play. First the theme: a post-apocalyptic jungle world where the sea levels are high and water is a huge feature of the battle space; factions that include intelligent gorillas and dinosaurs. At last, a use for those plastic aquarium plants! Then the complexity level and choices: the game features an easy action point system that allows you to constantly be able to react to your opponent. The 2-dice test resolution system gives a range of fun results, not just pass and fail. Movement focusses on fast, parkour-like climbing and leaping on ruined buildings above the water, but includes stealth options. You can even fire a gun while leaping out a window!

The amazing thing is that this system of reactions and test results looks complex on paper, but plays so fast and fluidly. After a turn or two of our first game the rules retreated into the background and the cinematic moments came to the fore – a stated goal of the game designer and one he has achieved admirably.

If you’re into tabletop miniatures war-games, I highly recommend taking a look at The Drowned Earth. After sending me game samples to check out, James of Olmec Games and I have continued to communicate and I’ve come to admire the hard work and passion he has put into making his own game, and the amazing results he’s achieved. Have I mentioned the gorgeous metal miniatures yet? Instead of constantly pouring money into the coffers of giants like Games Workshop (and let’s face it, their miniatures are stunning but their game rules are creaky as all hell), we really should be supporting small publishers like James who are creating really fun games.

Here’s my rules summary and reference, but look out for much more about The Drowned Earth, including a full review where I’ll go into much more detail about the game, and a battle report. 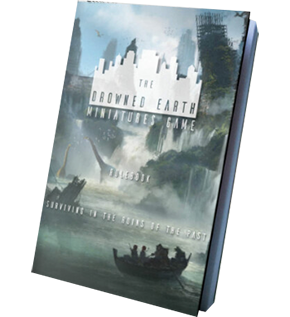