In the distant future, the virtual arena is prepared, the teams organized, and the challengers immersed in their personality templates, becoming the great archetypes from all of human history and experience.

Originally released over a decade ago, Duel of Ages was one of those games that floated around on the edge of my perception for years, but a cursory look saw it snubbed due to my (unreasonably demanding) requirements for graphic design. A lot of time has passed since the first edition and its many expansions, during which the game has attracted legions of fans. This new edition still suffers from a wildly varying standard of illustration and some unpolished graphic design. But—and I very, very rarely say this—the game is so much fun I hardly care. After some great reviews from people I respected, I snagged the Full Series Collector (Basic Set, Master Set and the Collector’s Bundle) and finally got the game on the table.

And by the powers if it isn’t fun. It’s like a crazy online FPS video game, only a lot more enjoyable and imaginative. If you don’t find Genghis Khan facing off against Spartacus while Annie Oakley takes pot shots at Martians, go elsewhere. But if that sounds like a hoot, you’ve come to the right place. Me, I laughed my head off and had a great time, but I can also see the amazing potential for variety and strategy that this incredible sandbox of a game has to offer. It really is something unique. 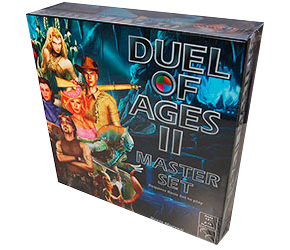