Across the globe, ancient evil is stirring. Now, you and your trusted circle of colleagues must travel around the world, working against all odds to hold back the approaching horror

Even Fantasy Flight Games couldn’t squeeze another expansion out of Arkham Horror, and revamping the game would cause all manner of confusion considering its large brood of expansions. So they sensibly created a new game ‘inspired’ by the classic: Eldritch Horror.

This one moves the action out of Arkham and its environs and makes the whole business global. It also streamlines and improves the Arkham Horror rules to make a faster (but not that fast, this is still a long game and will take 2-3 hours at least) and sleeker beast.

Despite my cynicism, this is a clever revamp of the system, with most of the fiddly bits filed off and a greater emphasis on the story. Each of the Ancient Ones has its own deck of research encounters and ‘mysteries’ you must solve in order to stave off the inevitable end of the world. And you can even visit the last locations of defeated investigators for a last bit of story filler, depending on whether they went insane or ended up in hospital … or worse.

Several expansions are already out of the gate (if you’ll excuse the pun) and no doubt they’ll be many more to come—and I’m looking forward to them, as it does feel that there is plenty of room for a gadzillion more cards. An extra board might be difficult though (Moon Horror perhaps?) 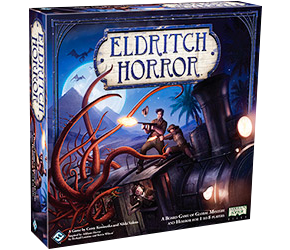