Mantic Games have been generously sending me their new games lately, and it’s really interesting to see the flood of quality product that is coming out of that company. Their new one is the second edition of a sci-fi skirmish system called Firefight, and there’s a lot to love here.

Let’s get the elephant in the room out of the way first—their miniatures are really not in the same league as Games Workshop’s, either in design or manufacturing quality, and I wish they’d make them less frustrating to build. But that aside, Mantic games are cheaper, better value, don’t hold to sneaky shenanigans like making you buy umpteen extra books, and most of all – the rules are great. And frankly, after stabbing my fingers for the hundredth time on GW’s spiky, fragile miniatures, the chunky simplicity of Mantic’s models is somewhat refreshing!

Firefight is a clean, easy to use rules system that isn’t afraid to simplify a few things in the pursuit of playability. It doesn’t get bogged down in obsessive detail, preferring to keep movement and ranged attacks a bit abstract by measuring them all from a unit’s leader (a bit of a tip of the hat to defunct classic AT-43 there). Combat is a simple two-roll affair. Close combat is considerably enlivened by a serious of keyword options that allow some troops to respond to being attacked in interesting ways. Buildings are efficiently divided into zones, and once you capture one with a unit you can shoot from any edge of the building. It all adds up to easy to play rules with an emphasis on fun, not fiddly detail.

One of the great things about this game (and its even easier-to-play sibling, Deadzone) is that a book is included that gives you all the stats you need for all the factions in the Mantic sci-fi miniatures range, not just the Marauders (space orcs) and Enforcers (marines) in the starter set. No buying extra books! That instantly increases the value of this starter set tenfold.

That all said, I haven’t actually got this to the table yet as I’m busy painting the 70-odd miniatures you get in this box. Stay tuned for a battle report – in the meantime, here’s an incredibly handy and complete rules summary and reference guide to make your games of Firefight even easier! 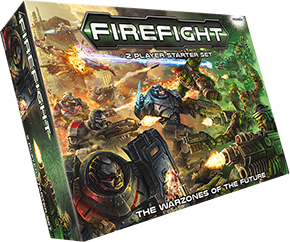