Command the most powerful soldiers in the galaxy!

Mantic Games, sometimes called the poor man’s Games Workshop but probably more aptly titled the person-with-a-normal-income’s Games Workshop, continue to pillage their inspiration’s back catalogue with this thinly disguised take on Necromunda. That all sounds critical, but it’s not! Games Workshop needs a reasonably-priced competitor, and Necromunda is one of my favourite games—so I’m happy to own Deadzone and I’m glad Mantic made it.

There’s nothing original in the way of theme here—it’s The Thing meets Warhammer 40K—but never mind, it’s just an excuse for some good old-fashioned squad-level biffo with some boxy terrain and pretty standard models. Deadzone’s modular plastic cube system is fine once you’ve built and painted some structures, but the connector system is fiddly and breakable and no where near as modular and ‘clip-together’ as Mantic advertises. The figures are somewhat uninspired, and the ‘restic’ plastic makes the considerable cleanup difficult and time consuming. The lack of assembly instructions is unforgiveable, as is the way the pictures of the terrain and miniatures on the box don’t match what you get inside. However the mousemat-material play mat is nice.

It took a crapload of construction, modelling and painting to get it on the table, and it’s not a job for beginners, so I made a series of videos on the preparation, construction and painting of the Deadzone components, and a two-part battle report video.

After just a few years Mantic decided it was time to ‘update and improve’ Deadzone, so another Kickstarter campaign later, Deadzone Second Edition arrived. Mantic advertised it as ‘faster, bloodier and easier to learn’, and while I wish I’d played more games of the original system (especially after all the time I put into making the original rules summary), simplicity is a good thing in this case. First edition was a bit fiddly. Plus, they’ve improved the quality of the original figures by making them in a decent hard plastic this time.

We’re up to Third Edition now, with even more streamlined rules and a new 2 player starter set that features the GCPS (‘Galactic Co-Prosperity Sphere’) marines, and the rat-like Veer-Myn (geddit?). It’s a great value set with those two factions in hard plastic (and a couple of resin models), a generous amount of terrain of terrain fully compatible with the old sets, and 2 thick softcover books, one of which features Deadzone stats for all the miniatures in their scifi Warpath line. While Mantic still make it extremely difficult for beginners for some strange reason, at least this time there’s a starting scenario on one side of the paper map, and a Getting Started leaflet. You’ll still need help constructing the miniatures though – check out my ‘How to Build’ video in the column of links to the right (and this old video about building and painting the terrain still applies), and of course, download my brand new rules & reference below when you start playing. And check out my battle report! 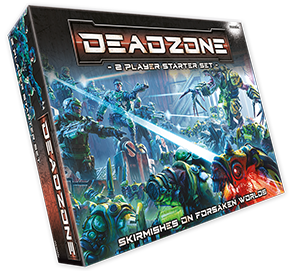