A game of cutthroat swashbuckling piracy.

Freely stealing ideas from the Pirates of the Caribbean films, which in turn stole ideas from almost every pirate-themed movie and book in existence, Rum & Bones was originally a miniatures skirmish game. Purchased by Cool Mini or Not, it was reborn as this spectacular-looking boardgame. Inspired by MOBA (Multiplayer Online Battle Arena) style video games, it features packs of deckhands and bosuns clashing inexorably together on two ships while heroes sweep among the rigging and move about on the decks belabouring to and fro with cutlasses and their piratey special abilities. Oh, and they have a Kraken.

CMON really hit their stride with this game. Delivered almost on time, chock full of miniatures bursting with character, and packed with great artwork and high quality components, it reflected a company successfully getting their Kickstarter campaign ducks in a row.

Not too soon after, CMON rearranged those ducks and released Rum & Bones: Second Tide, a ‘new and improved’ version with alternating activations and a skill upgrade system. It’s definitely a better game and worth owning, though one can’t help but wish it had been the game that got released the first time. Thankfully, the figures and boards from the original version can be used with Second Tide. 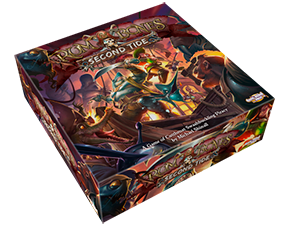