Set in Fantasy Flight Games’ generic fantasy world of Runebound, Runewars is a ‘big box’ fantasy conquest game for 2-4 players with lots of colourful components, plastic figures and cards. Just the way I like ’em! A satisfying and involving game. This summary includes the Banners of War expansion and has been updated for the revised edition. 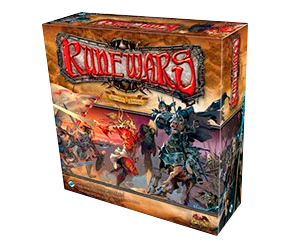