Fight with courage, assist your teammates, defend the villagers, turn into a savage beast, and wreak havoc on the enemy lines.

I’m not a fan of Antoine Bauza’s Ghost Stories; every time I’ve played it, it seemed to hold so much promise, but then it grinds me down with it’s difficulty – nay, seeming impossibility! So perhaps it wasn’t a great idea for me to get Samurai Spirit, another difficult co-operative puzzle of a game.

But it looks so good! The graphic design and illustration here sucks you into a fantasy version of Akira Kurosawa’s Seven Samurai (or the Hollywood version, The Magnificent Seven). You are samurai defending a village from waves of plunderers, and you’re going to need to co-operate to defeat them and save the villagers. There’s a lot packed into this little box (and it’s very nice to see the restraint on display here; another company could have easily added some miniatures, doubled the size of the board and put it in a normal box with a high price tag).

I haven’t yet got Samurai Spirit to the table, but I hope it doesn’t pummel me into despair like Ghost Stories always seems to do! 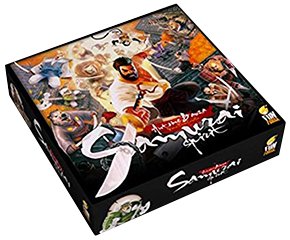