Boldly go where no one has gone before.

I quite like a bit of Star Trek, despite the fact it is under-represented in my game library, so I was excited to see the release of this epic exploration and conquest game by Gale Force Nine. Then the price tag and the fact that the core set only supports three players put me off purchasing for a couple of years.

But after seeing it on special recently I couldn’t resist boldly buying, and I’m glad I did. It’s a relatively straightforward but involving game, and if luck can unbalance things a bit, and there’s a tendency to gang up on the leader, these things can be overlooked in return for a long evening of thematic enjoyment as you build up your space empire. Just keep an eye on your rivals, because you can easily win the game without firing a shot!

The expansions that allow more players to get involved aren’t cheap, but now I’ve enjoyed the game I can’t resist roping in some more players and getting back out into the galaxy. For gamers who are Star Trek fans then, this is a must buy. Live long and game well! 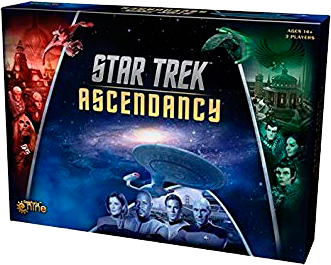