Transplant medieval Japan into the far future, add giant space-fighting mechs and swarms of spaceships, and you have Starship Samurai by Plaid Hat games, a fast-paced and surprisingly vicious area control game.

The first thing that jumps out at you are 8 huge mech miniatures (there are two more in the expansion Shattered Alliances) which, let’s face it, are total eye candy. But they serve as imposing foci for your attention as, along with a number of fighter miniatures and a carrier miniature, you grapple with the other players for control of a number of planet locations. Your main goal is to influence a number of lesser clans to join your cause, and since moving these up your column on the alliance board often involves moving them down other players tracks first, it can feel a bit ‘take that’ sometimes, since you’re almost always taking away from somebody to advance your own agenda. Or perhaps I’m just speaking from the perspective of someone who felt a bit ganged-up on during their first game!

There’s a lot to enjoy here: the game is short and fast-paced, the choices interesting, and it’s very competitive. There’s a clever order system of tokens marked 1 to 4, and which of these tokens you place impacts the effectiveness of your order (and you can spend wealth to increase it even more). Of course the mechs have special powers, and a variety of action cards keep the battles exciting. Starship Samurai is a compact and well-produced game of space conquest and influence and definitely interesting enough to merit a place in your collection. 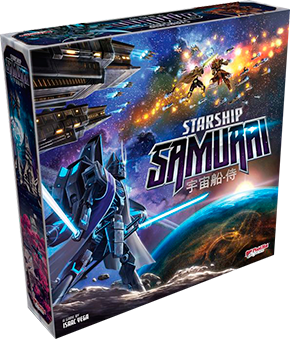