Players battle for galactic domination on a dynamic board of interconnected planets.

Starcraft: The Board Game is a masterful science-fiction conquest boardgame that, while challenging, is a must for fans of the Blizzard computer game and sci-fi fans in general. There’s a lot of detail and a lot to remember—this is an epic ‘coffin-box’ game—but once you get the hang of it Starcraft is an deep and satisfying gaming experience.

Just like in the computer game by Blizzard Entertainment, there are three races in Starcraft, and here you can choose from one of two factions of each race. There are the ravenous insectoid Zerg (Overmind and Queen of Blades factions), the resourceful human Terrans (Jim Raynor and Arcturus Mengsk factions, and the enigmatic and advanced Protoss (Tassadar and Aldaris factions).

Each of these factions is represented by a spectacular array of plastic figures (three types in six colours)—your forces that will expand into the galaxy from your home planet. The level of component quality throughout the game is just stunning. Each of the races has a very distinctive look-and-feel: the workmanlike, functional lines of the Terrans, the sleek and curvy high tech of the Protoss, and the organic, Alien-inspired Zerg. The large planet tiles—divided into areas to mine and conquer and joined together via jigsaw-shape space routes—each feature an illustrated planet with a distinct personality.

The core of Starcraft is the exploitation of planet resources in the form of minerals and gas. Using your Worker tokens, you harvest the resource cards corresponding to planet areas you own, using the minerals and gas to build new workers, units, transport routes to other planets, new and upgraded buildings, upgraded bases, research new technology, and importantly, build new bases.

The entire game is a fascinating balance between building up your resources, building new units and upgrading your capabilities, then using those units and abilities to invade other planets, which in turn give you more resources to continue the cycle. You’ll also be targeting planet areas that give you Conquest points, because with fifteen of these points you can win the game. There are other ways of winning however—each faction has a special victory condition, and the game’s Event deck also acts as a timer; it is divided into three stages, and once it runs out the player with the most Conquest points wins.

So how do you decide what to do and when to do it? Each turn starts with the Planning Phase, in which players take turns placing four orders each (typically either Build, Mobilize or Research orders) on the planets on which they wish to execute those orders. The clever thing about order placement is that the orders are placed facedown in a token stack and then executed from the top of a stack to the bottom. So you have to think ahead—if you plan to Build units, then use a Mobilize order to attack another area on the same planet, you have to place the Mobilize order first, and then the Build order. It can take a couple of turns to get the hang of this, but once you do, you quickly appreciate the strategic options—and the effectiveness of the occasional bluff!

Another fascinating aspect of Starcraft is the combat system. Inevitably you’ll be clashing mandibles/lasers/missiles/whatever with another race out to conquer the galaxy, and deadly conflict will result. Combat is resolved with the use of Combat cards; ingeniously, these have an intrinsic attack and health values, but are far more powerful if matched with the unit type depicted on the card. If you do so, not only will the card values be higher, but special unit abilities will come into play. Thus there is quite a bit of card management involved as you cycle through your combat deck trying to get the optimum hand to play just when you attack.

The Brood War expansion is one of those rare expansions that is really an essential purchase. Not only does it add more units and interesting rules, but it changes the special victory conditions by replacing them with Leadership cards: now these special conditions are a choice, and you may instead choose to make use of any number of other advantages, keyed to the three phases of the game. The combat deck has been modified somewhat for greater balance, and the expansion also includes revised faction sheets, and more planets. The general consensus from Starcraft fans is that this is one expansion you’ll never play the base game without.

One of the best ‘big’ games Fantasy Flight has released ever, and not just because you can play it in a reasonable length of time. Starcraft is a winner that seems complicated on first read but flows beautifully in play. My summary and reference includes two versions—one for the base game and one for playing the game with the Brood War expansion changes and additions. 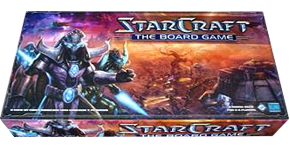