A board game of cunning heist action.

Gale Force Nine have been releasing game after game lately, and the latest is Pirates of Skydock, a scifi action heist game set in the universe of Starfinder. Starfinder is a roleplaying game by Lazio, the SF equivalent of Pathfinder, and by strange coincidence I’ve just started playing in a campaign using the system.

In the game, players compete to steal a spaceship sitting in the dock (the Skydock, in fact). You have abilities you can upgrade during the game, you can move around the ship, loot, play schemes, interact with specialised rooms, achieve objectives, airlock poor guards, and even get points by fulfilling the mission of your secret backer.

This is a fun, straightforward game, nice and short but with plenty of choices – and t’s great to see something nice and colourful after the somewhat dark and washed-out movie stills we’ve been seeing in the recent Dune game. As I mention in my review video, it reminds me of another short scifi heist game called Infiltration, one of my long-time favourites, and I can see it hitting the table a lot when we have time for ‘just one more game’ at the end of an evening.

Check out the review for more info, and download my rules summary. Good luck stealing that ship! 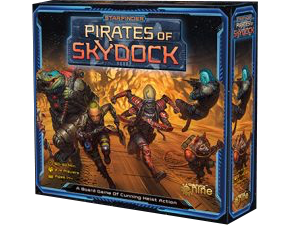