The Thing: The Boardgame

Man is the warmest place to hide.

It’s very exciting to see one of my favourite films of all time, John Carpenter’s The Thing, get the deluxe board game treatment. And almost every beat from the film has been faithfully reproduced in this excellent game – though you’re going to have to assimilate a lot of rules as a result.

It’s a wonderfully thematic experience if you have players willing to immerse themselves in the tension, deception, and downright creepiness of it all. In our first game the accusations came thick and fast right from the start, and the rules encourage the kind of edgy paranoia that characterises the film. Of course with all these moving parts some games are going to be better than others, and there may be someone who just wants to burn everything down or freeze everybody to death, but every strategy is valid! Check out my unboxing and video review for heaps of detail about the game and how it plays.

Much like the eponymous alien however, this is an unwieldy beast, and the poorly written rulebook doesn’t make things easier, with strange naming conventions and blurry edge-cases (and those 1-3 player rules are truly atrocious). However I’ve tried to fix up as much of that as possible in my rules summary and reference, which also includes the rules for the Norwegian Outpost expansion (based on the later 2011 film). 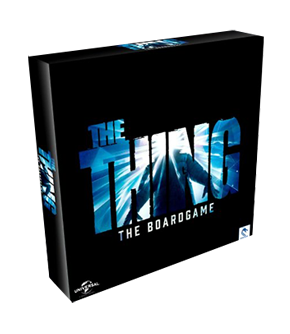