The ram and wreck survival game.

Kid’s version of Car Wars meets Mad Max from 1986 that came with great little plastic cars and helicopters. Each team of three cars and a helicopter battles it out on a stretch of post-apocalyptic—highway; the game came with two sections, and you repositioned the back piece to the front when the cars had moved off it, the rear one continually moving up to become the front one as the cars zoom along, guns blazing—making a rolling section of endless highway. Great little plastic pieces and very simple rules make this a great bash-‘em-up car combat game that sits nicely on that nebulous border between toy and game. If you’re buying this on Ebay, be careful; the US and UK versions were made in different scales! 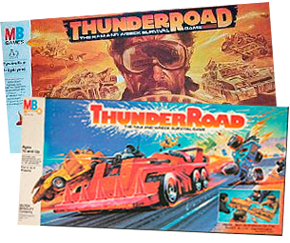