Vikings Gone Wild: The Board Game

Prove to the gods who is best!

This fun deck-builder from Lucky Duck Games jumps right out of the box with its big, bold, colourful art and lovely components. And check out that 3D first player marker! Lovely stuff. Based on a mobile game, in Vikings Gone Wild you spend beer and gold to purchase units, erect buildings to store your beer and gold, attack other players, and defend your buildings with defense cards. And probably drink a lot of beer. I have never seen so many references to beer in a board game in my life. Which instantly ups the fun factor in my book!

I’m not usually a big fan of deck-builders, but this game is a hoot, and exactly the level of length, fun and complexity I want from the genre. Of course, after all that beer your memory even the best gamer’s memory can become a little impaired, so here’s a rules summary and reference to make your games flow without getting the axes out!

The expansions add all kinds of fun stuff: team play in Guild Wars, magic in It’s a Kind of Magic, elemental resources and gods in Masters of Elements, and finally an all-out solo or co-op battle against hordes of undead in Ragnarok!. All those rules are also summarised here. 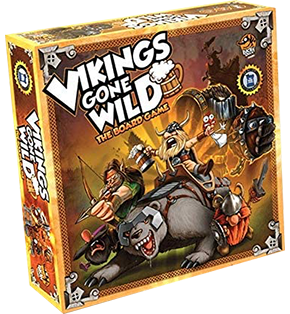