Adventures in the Wild West, cowboys and indians, high noon duels—all that stuff never really sparked my imagination as a kid, though I did have a Lone Ranger action figure when I was about ten. More recently, I gave up on Red Dead Redemption after a few hours. But let’s face it, a lot of science fiction and fantasy movies are just based on plots from old Westerns, so why not go back to the source material now and again?

In Western Legends, you can play in a Wild West sandbox full of all the classic tropes of the genre—saloon poker, rustling cattle, bandit shootouts, and prospecting for gold, it’s all here. Several expansions expand the options to include train heists and high stakes poker, among other stuff. It’s a straightforward system of gathering items and completing quests in the race for ‘legendary points’, with the nice thematic touch of being based on a set of playing cards.

Production quality and graphic design is fine if not outstanding—the cardboard stands for the General Store (and Trading Post in the Ante Up expansion) are a very nice touch, and the game does come with a bunch of generic miniatures of about the same quality level as Shadows of Brimstone. I was frustrated however when I discovered my copy was missing some cards; it’s been a long time since I received a game with missing components, and it took me over a month to get replacements from the distributor (though the publisher did offer to help via Twitter).

But since then I’ve played Western Legends several times, and enjoy it a lot. It’s thematic, fun situations are thrown up by the randomness, and there’s enough competition between players to keep things interesting. I quickly bought the Ante Up, Wild Bunch of Extras, The Good, The Bad, and The Handsome, Fistful of Extras, and recently Blood Money expansions, as these types of games are always improved by more content. So grab yourself this rules summary and references (which includes them all), and saddle up pardner! 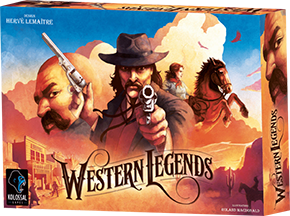