If I kill you, I am bound for hell. It is a price I shall gladly pay.

Let the virtues be your guide with your Solomon Kane rules summary and reference!

I very much enjoy reading the old pulp writers: Howard, Lovecraft, Ashton Smith and the rest, so when Mythic announced a game based on Robert E. Howard’s sombre 17th century puritan hero Solomon Kane, I was very excited. I bothered poor Mythic for some time to get a copy, so it was quite something to finally see these two big black boxes hit the doorstep.

Solomon Kane could easily have been just another miniatures-on-tiles combat game, so it’s quite refreshing to experience this unique take on his gothic world. Instead of playing characters, you play immortal, supernatural Virtues (Temperance, Prudence, Courage, and Justice) that each use their unique powers to direct Solomon’s destiny as he navigates through a series of story chapters, struggling against the forces of Darkness. It’s a strange perspective, but one that allows the game to really zoom in on the psychological nitty-gritty of a story and the characters involved – in fact you may find yourself conducting only one combat in an evening’s gaming. Through the simple mechanic of matching dice symbols to various abilities on your Virtue dashboard or action cards, you’ll all control every decision made by the eponymous hero in a truly co-operative fashion (though there are solo and competitive modes too).

Sometimes this can lead to fascinating, granular glimpses into the minds and motivations of the characters involved; other times you’ll be frustrated when you want to just move Solomon one space to the right but don’t have the dice symbols to do it. Every decision and consequence leads to a new discovery card specific to that story that tweaks the framework of that chapter’s rules. It’s a system that pushes and pulls, fighting you for control of the characters, and I haven’t quite come to terms with it yet, having only played one 2-player game and one solo game. I wonder – do dice-matching systems really provide a player enough meaningful choices, and has story trumped gameplay when my options are so tightly controlled in each chapter? But I’m certainly intrigued enough to continue playing to find out the answers to these questions, and explore the experience, especially with more players. I’ll let you know what I discover – look out for a full review (and a painting tutorial).

The miniatures, while just a little bit superfluous to proceedings – they’re not required at all in the ‘story’ acts, and in the ‘scene’ acts you may only use a few map tiles and a small number of minis – are excellent; bold designs full of character, made of a strong plastic that means, delightfully, there’s not a droopy spear in sight. Each story is a mixture of well-written book entries and discovery cards that detail the branching choices, and the combat system drips with thematic detail through an extensive system of fight cards. 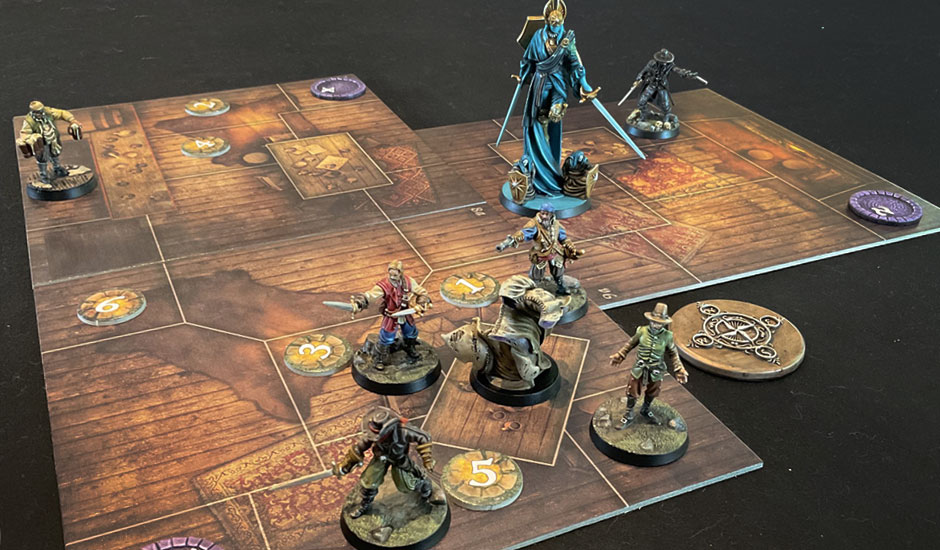 I love that Mythic did something different here, and while I’m beginning to find co-op story games in general just a bit lacking in interesting gameplay choices after playing so many of them, if you’re up for an evening of supernatural adventure fiction fuelled by dice-rolling symbol-matching, this is just the thing.

Mythic have promised better rulebooks in future games, and indeed are already making them (the reworked Reichbusters one is a case in point), but unfortunately I found this one strangely organised and confusing – you’re halfway through the book before you’re told the game sequence – and it took me a while to understand the system and then massage into what I think is a more comprehensible layout. My hope is this summary and reference will help you get into Solomon’s head a lot sooner than I did!

PS: Mythic Games sent me a copy of Steamwatchers for review, and commissioned this rules summary and reference. As always, opinions are my own.