The world of Blue Moon is in chaos.

A clever little card game from Reiner Knizia with a strange, very European, fantasy theme. The base set caters for play between two races, and several more races can be purchased separately. Surprisingly deep if you play often. Recently re-released with all the expansions in one box by Fantasy Flight Games and definitely worth picking up.

Everything originally released for the game was recently re-released in one box by Fantasy Flight Games as Blue Moon Legends. 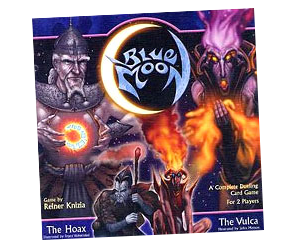