Mutant Chronicles: Siege of the Citadel (2019)

The liberation of Venus continues live with Capitol Radio One!

The original Siege of the Citadel is one of those old games that was wonderfully overproduced and colourful and straddled the line between game and toy, so it was only a matter of time before someone re-released it for the Kickstarter age. It’s set in the Mutant Chronicles universe, a milieu probably well-developed in its original form as a RPG, but strangely lifeless when it’s been applied to other games. It comes across as a sort of poor man’s Warhammer 40,000: big shoulderpads and gothic scifi, but in this case with a bit of a cartoony look to everything.

You can probably tell that I’m not a particular fan, though I do have the original game, and the short-lived Mutant Chronicles Collectible Miniatures Game by Fantasy Flight. But the new campaign from Modiphius was launched back when I was first getting into Kickstarters, the names attached to it as designers are well known, and it seemed a good idea at the time. It seemed less of a good idea when I had to wait over four years to get what I paid for.

So unfortunately, I won’t be backing any more campaigns by Modiphius; though they did eventually come through in the end, which is more than I can say for a couple of other campaigns I’ve backed. Because it took so long—and because of the source material—the whole thing seems strangely dated however, with not even the toy-like feeling of fun as saving grace. The rules are basic, and it all looks like something Fantasy Flight would have made years ago, down to the the big floppy square rulebooks. Which is not surprising considering that at one stage it was going to be distributed by FFG. Some things are poorly thought out; for example the big cardboard walls you can add to the central board don’t fit in the box and will probably just kick around my room getting damaged. And unfortunately the miniatures range from OK to pretty bad.

Though I quickly painted up most of the core set it took me a year to finally get around to playing the game (with two players, though I believe it does play better with more). Check out the battle report video. As expected, it’s very light, and reminds me of simple dungeon crawlers Heroquest, but if you’re in a beer-and-pretzels roll-dice-and-kill-things kind of mood it’s fun. 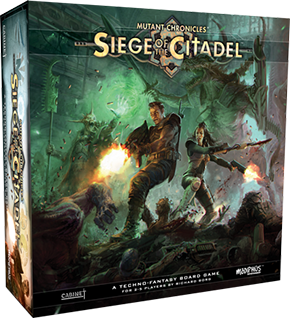