When faced with the ultimate horror, will you trust your crewmates?

Awaken Realms continue to produce beautiful, intensely thematic games, and Nemesis is probably their most successful release yet, from both gameplay and production perspectives.

A while back I was bemoaning the lack of games with an Alien-like theme, but now we have an embarrassment of riches with AVP: The Hunt Begins, Lifeform, and Nemesis (and now I’ve done rules summaries for them all, I might add!) Nemesis, for me, is more James Cameron Aliens than Lifeform’s Ridley Scott Alien, because in this game, you can fight back and the aliens can die. However the tension that is so important in this sub-genre is definitely still there: not only are the alien miniatures in the game huge and horrifying, but they are drawn to you if you make too much noise. It’s a classic, creepy mechanic that gives the game a haunted house feel scattered with moments of horrific violence.

Not only will you be trying to stay quiet to survive, you’ll be closely watching your fellow players. The game is a co-op, but at the start of the game each player draws 2 objective cards, one ‘personal’ and one ‘corporate’, and must choose one as their win objective when the first alien shows up. So while you may be getting along fine when you have to fight the aliens together, you never quite know what the other players’ final agendas are. This can lead to some fantastic story moments and sudden, devastating betrayals. I’m sure that more than one Nemesis player has found themselves on the wrong side of an escape pod door just before the self-destruct marker reached the end of the track!

Production values are through the roof on this one, and everything reinforces the atmosphere of dark, sci-fi horror. Several expansions give you the opportunity to experiment with different alien types too.

Nemesis is a fantastic experience and just the kind of thematic game I love. There’s also now a stand-alone sequel called Nemesis: Lockdown set on a secret Mars base which after one play, struck me as even more enjoyable (look out for a rules summary of that one as well, soon). 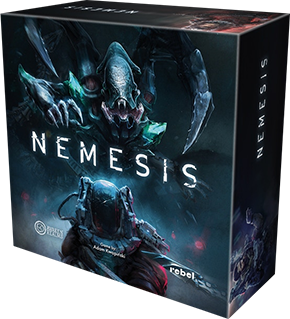