A game of conflict in the grim future

How many Living Card Games can Fantasy Flight Games produce and support? It’s a relevant question, because beyond the impulse buy factor of the core set, LCGs do demand a certain amount of regular play and commitment that can be spread thin over too many of them. In the wake of truly exceptional LCG card games like Android: Netrunner, time will tell whether Warhammer 40,000 Conquest can inspire the level of dedication required to ensure a long lifespan.

There are similarities here to Blood Bowl: Team Manager in the way players assign cards to a central row of objectives, and some have thought that there’s nothing particluarly unique and original in this design. However it also seems to reveal greater depth and strategy with further play. I do think it’s a shame that FFG chose to release this game in a smaller box, as in a strange way it discourages you from collecting further and filling out that empty box (it’s subtle, but these things can influence obsessive set collectors like myself). But they have provided variety in the starter set, allowing you to try out seven different factions and their play styles, and the overall quality is up to FFG’s usual high standard. 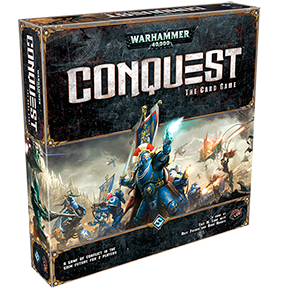