The network is omnipresent, the crux of modern human civilization, and while visionary corporations seek to secure their most valuable data on the network, the elite hackers known as netrunners seek to steal it.

In 2012 Fantasy Flight Games relaunched this acclaimed assymetrical card game, originally designed by Richard Garfield in 1996, and it immediately became a big success. The theme—slightly jigged to fit FFG’s Android universe as seen in the games Android and Infiltration—seems a bit dated to me now; cybercrime, cyberpunk—anything with ‘cyber’ in it, really—seems to firmly belong to the 90s, the birth of the internet, William Gibson, and an unfortunate film with Keanu Reeves in it (Johnny Memnonic of course, not The Matrix). But perhaps that’s why it appeals to gamers so much, for the retro or nostalgia value depending on your vintage.

Quite apart from the theme however, this is a very original game of hacking and corporations and ‘jacking in’, and monthly extension packs enhance the endless possibilities for those who enjoy deckbuilding. I haven’t yet had the opportunity to play it, so this summary and reference doesn’t yet have the benefit of personal experience behind it. If you have some suggestions for its improvement, please let me know in the comments below! 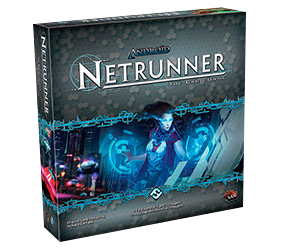