As Fantasy Flight Games closes the book on Warhammer Fantasy Roleplay 3rd Edition, I take a brief look back at the history of ‘WFRP’.

While Flagelant the dwarf scales the back wall and enters a second-level window the other party members distract the old woman who owns the house by telling her they are members of a Knitting Guild who have heard about her wonderful cat blankets. Flagelant searches Adolphus’s room and finds his diary, which details his progress infiltrating the Jade Sceptre chaos cult. Once he has safely left the house, the others snatch back the 15 gold crowns they had offered the old woman for her cat blanket, all shouting in unison: “Carnival! We’re the Merry Pranksters!” They leave her close to shock.

Sometimes it’s very difficult to separate your love for a game from the business realities that surround it. A perfect case in point is Warhammer Fantasy Roleplay. Fantasy Flight Games recently announced that their third edition, first released in 2009 but to all intents and purposes dead since the release of the last campaign book at the end of 2012, has come to an end. I’m sure we can all understand why the ‘official’ announcement was probably postponed so long—to keep selling back inventory—though it’s a shame that so little has happened with the game in the last two years. But now this edition of WFRP is no more, let’s have a look back over the turbulent history of the game as it once again falls back into limbo.

In 1986, Games Workshop released a big thick green book called Warhammer Fantasy Roleplay, and everything changed. This was a roleplaying system like no other. Up until then, my friends and I had pretty much stayed in the TSR (publishers of D&D) camp: Empire of the Petal Throne, AD&D, a bit of Gamma World and Star Frontiers; with the occasional foray into games such as Call of Cthulhu and Chill by other publishers. But essentially, these systems were all pretty much the same. WFRP immediately felt very, very different.

Perhaps it was the way characters jumped between real careers rather than abstract levels. Certainly the deadly, graphic combat was a shock: I’ll never forget the look on one of my player’s faces in our first game, when a simple bar brawn gave him a broken leg and he had to recuperate on a barge for two weeks.

But mainly there was that grim, gritty feeling that made the world feel real. The writers were from the UK rather than the USA, so there seemed to be something more authentic about the fantasy. From the very start WFRP carved out a new vision of the Warhammer world that was a lot darker and more interesting than the fantasy world of tabletop battles that inspired it. The medieval Germanesque world of The Empire, the feeling of a society riddled with a corruption bubbling just under the surface, the dark cults and the beastmen-haunted forests—it was all a universe away from the shiny armour and heroic moustaches of the Dragonlance saga, then defining the American-style fantasy of AD&D. In fact, since we jumped directly from halfway through the Dragonlance modules to the grim little adventure in the back of the WFRP book, we noticed the change vividly. 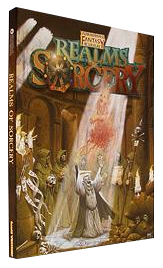 Fast forward almost a decade, and my gaming pals and I were still, on the occasional times we managed to get everyone together, playing WFRP. We got most of the way through the truly classic campaign The Enemy Within (before it went off the rails halfway through Something Rotten in Kislev). What is often forgotten these days is just how short the early golden days of WFRP were: even by 1989, when GW turned publication of it over to their Flame Publications division, the writing was on the wall with the poor quality of the D&D-like Doomstones adventures.

In 2000, during my second stint living in London, I met James Wallis, the licence-holder for the game with his company Hogshead Publishing since 1995. It was a personal career milestone to create the graphic design of the cover of the long-awaited Realms of Sorcery supplement (shown on the left) and add a page to the history of WFRP. James did a valiant job re-releasing old supplements and adventures and releasing new material to keep the game alive, but Games Workshop was creatively restrictive and the essential flavour of WFRP was slowly dying. He pulled out in 2002. 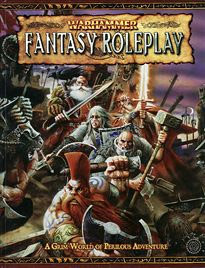 Two years later, and a second edition was announced, published by Games Workshop’s Black Industries and designed by Green Ronin Publishing. It was a good time for WFRP. The system remained pretty much the same, with some improvements, and the gritty feel of WFRP was intact. Despite being forced to shoehorn in the then-current GW obsession with their ‘Storm of Chaos’ campaign, there followed a long product line that produced a lot of new material, including the impressive, though somewhat flawed The Thousand Thrones campaign. 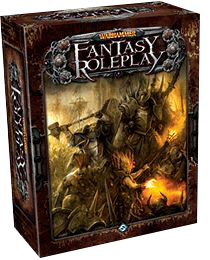 In 2008, Fantasy Flight Games took over the licence and everything changed. Designer Jay Little and his team released something so different, so revolutionary, that old fans were horrified and new ones were confused. You can look back now and see what a grand experiment the whole thing was and, like any experiment, there were things that worked and things that didn’t. A new emphasis on cards and components brought aggrieved cries of “it’s a glorified boardgame” from the fans. In general, FFG probably underestimated the attachment that fans had to the old system, perhaps assuming that they would eventually come around, but the differences were so great that not only did some old fans stay away, but new fans were intimidated and confused by the game. This wasn’t helped by a high introductory price point and a core set that only supported four players. Later, FFG tried to re-launch the game and de-emphasise the necessity for playing with all the components with a series of separate guide books and small component boxes, but it only succeeded in confusing players still further. 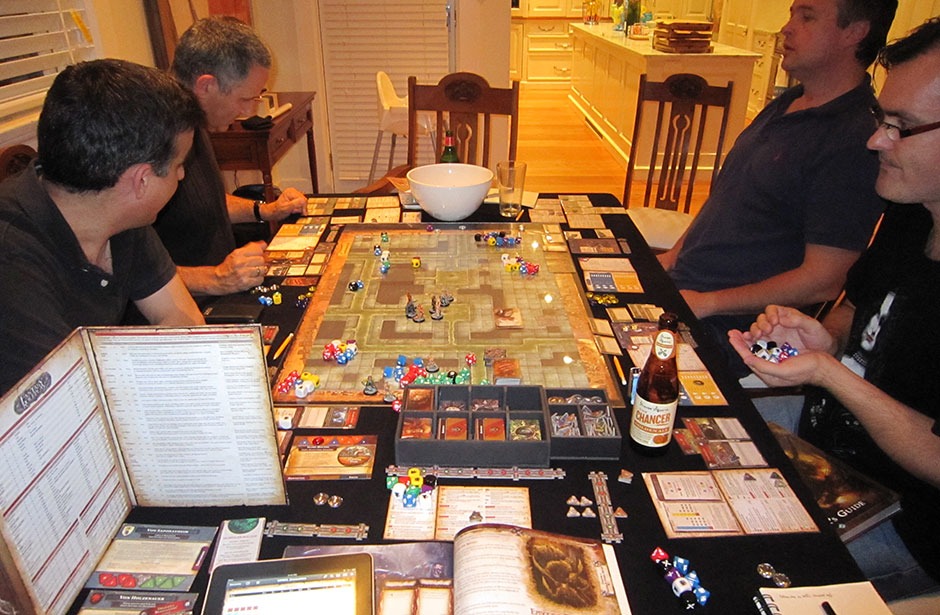 What did I do? I was, after all, one of those ‘old players’ who had been with the game since 1987. Well, I jumped in boots and all (I own pretty much everything ever published for all three editions of the game). I thought it was exciting and refreshing to see something different happening in roleplaying, and applauded the very visual nature of the new game. After attempting to convert our old characters, we decided to start from scratch, and began a new campaign with brand new adventurers (one of which was the bastard son of one of the old characters). Despite our best efforts, the new system took quite a while to get the hang of, and often felt too much trouble than it was worth. You can see by the files I’m providing you with today how much effort I put into creating documents that would juggle all the required information and keep the game running smoothly. The picture above gives shows you the space required to play a game and the number of components to juggle—in fact Will, in the top left of the photo, is busy trying to work out what particular dice apply to what he wants to do, a process that only became more complicated as characters developed.

The great innovation was the storytelling dice mechanic

Which is a huge shame, because when it worked, it really worked. The great innovation was the storytelling dice mechanic, which took things far beyond the realms of success-or-fail to highly detailed and descriptive results that enhanced the roleplaying possibilities of every situation. Where the system didn’t work was the juggling of myriad components and the unnecessary complexity, a situation that only got worse as more supplements were released and the whole game system started to feel like a tottering layer cake of bolted on rules and hundreds of cards. It’s obvious that FFG has since learned a lesson, because the new Star Wars RPGs keep the best bits from WFRP3 and throws out the complexity and all the extraneous bits and pieces.

The Future of WFRP

Over on the Fantasy Flight Games forums, they’re already chatting about the possibility of a 4th edition, but I think it’s time for WFRP to have a long, long rest. There’s a world of difference between the 1st, 2nd and 3rd editions, so you can choose the flavour you prefer. Someone is even cooking up an even grittier fan-made version called Zweihander. But I think if anyone returns to WFRP, we don’t need another set of rules, just good quality, system-agnostic source material and adventures. Unfortunately, there has never been a strong, unified hand on the tiller when it comes to extended WFRP campaigns, and they have always suffered from an unevenness that comes from multiple authors developing separate chapters, sometimes writing in wildly different tones. In addition, the game cries out for new and interesting adventures that don’t warm up the tired old tropes of skaven in the sewers, beastmen in the forests, and nobles in chaos cults. I know my players were getting sick to death of killing beastmen by the time our last campaign ran down…

One day we’ll all return to the Old World for a game or two, and perhaps old characters will be resurrected (or the sons of the sons of our old characters will begin their first careers), and the adventures of the Merry Pranksters and their descendants will continue. You can read all about what they got up to during campaigns using all three editions, at our campaign diary website, which often makes for pretty entertaining reading. But for now, the book is closed, and Warhammer Fantasy Roleplay is dead.

I created a huge amount of summary and reference material for WFRP 3rd edition in an attempt to streamline its sometimes unwieldy systems. For the first time, I’m sharing it all on the WFRP 3rd Edition page. If by some chance you’re just starting off with WFRP3 and its published adventures, I think you’ll find it all incredibly useful. It even includes my first attempts at interactive reference material: armed with an iPad and the app PDF Expert, you can make use of the hyperlinks and interactive checkboxes in some of the documents.

This article is dedicated to Bernard, who peacefully passed away at the age of 83 on the 22nd August, while I was writing it. Rest in peace Bernard. Here’s to your full life, packed with real adventure.

Fantasy Flight GamesGames WorkshopWarhammerWFRP
Sign up for the monthly newsletter