A Game of Thrones: The Card Game Second Edition

An card game of intrigue, betrayal, and epic battles.

Fantasy Flight Games has quite a few Living Card Games (LCGs) in its catalogue these days and A Game of Thrones: The Card Game is one of most venerable. Now comfortably into its second incarnation, it deserves the accolades, and it’s a great time to get in on the ground floor of this fascinating game.

I’ve recently been lucky enough to find a like-minded player with whom I can play these kinds of card games regularly, and regular play with a good opponent really makes them shine. After games of Star Wars: The Card Game, Android: Netrunner, Warhammer: Invasion and Warhammer 40,000: Conquest, we’ve discovered they’re all fascinating and engaging in their own unique ways. Keeping up with the latest releases of so many LCGs would definitely be a serious drain on the wallet, but it’s not necessary to get everything released for a game unless you’re really obsessed with it.

All of these LCGs are great, and it’s remarkable how much gaming enjoyment you can get from a few decks of cards. Sure, it’s initially daunting when you’re confronted by the endless special abilities and combos, but it’s amazing how quickly you begin to remember the abilities of a card from its image alone, and the possibilities for clever play begin to open up.

A Game of Thrones: The Card Game is almost like a boardgame in its level of engagement and interest (and games can run as long sometimes). There’s a large variety of factions (or in this case, Houses) to choose from, all with individual play styles, strategies and combos. I highly recommend picking up at least a couple of the core sets and diving in. Of course, if you’re a fan of George R. R. Martin’s creation, you’ll find the game even more engaging.

Note that this is just a summary of the rules, and while I’ve picked out the most relevant clarifications from the Rules Reference book and the information should suffice for almost all casual play situations, refer to that guide for the kind of nitpicky detail necessary to fully define Tournament play. 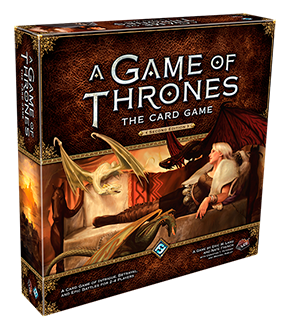