Tainted Grail: The Fall of Avalon

In Avalon, there’s a legend waiting behind every stone and every tree.

Awaken Realms do some pretty cool stuff, and although delivery times on their Kickstarters can be long (especially if you don’t want to pay for two shipments), once they do arrive they capture that certain special excitement that first made me obsessed with boardgames. This War of Mine and Nemesis are visually stunning games with great production, arresting, immersive stories, and most importantly, mechanics that work. Tainted Grail looks like another triumph.

It’s a deeply story-driven game of exploration, diplomacy and combat in a dark version of the Arthurian legends, with an interesting mechanic that allows you to chain together cards when fighting—or diplomatically negotiating with—the people and creatures you encounter.

There’s several novels worth of story content and almost 1,500 cards if you total what’s in the core set and the three extra adventure campaigns. Not to mention some very detailed, otherworldy and creepy miniatures. That’s enough to keep anyone playing for quite some time to come!

My only criticism so far is a very common one, especially for foreign-language publishers—the rulebook is challenging to read at best, with a messy and crowded layout and stream-of-consciousness approach to rules writing. But fear not, I’ve solved that problem with this rules summary and reference, which should make the rules a lot clearer and the game easier to play. Good luck on your quests! 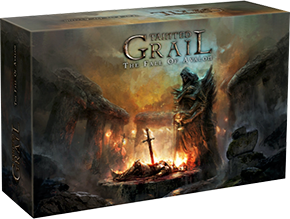