Scenario-based conflict in the Batman universe, past and present.

The ingenious ‘energy cube’ system of Monolith’s excellent Conan game has been cleverly re-themed for the insanely popular Batman universe, and two Kickstarters have been huge successes for the company (a ‘season 2’ quickly followed the original campaign). I was expected more changes to the original system, but there’s really just a rework of the special abilities and a couple more types of dice when you get down to it.

Everything is high quality and the game is enjoyable, but there are some frustrations. The rulebook is impenetrably bad, overwritten and pedantic to the point of obscurity. The graphic design is fiddly and the icons difficult to read quickly in-game. And the scenarios eschew baddie-bashing fun for very tight puzzle-solving, which can still all be dashed by a few unlucky rolls. I find it frustrating that superheroes have to spend a turn or two ‘resting’ to regain their energy—these are fights that last a few minutes, hasn’t Batman being working on his cardio enough?

The new versus mode that pits two ‘overlord players’ against each other is a lot of fun though, and a refreshing change from the asymmetric play of the main game. Otherwise, there does feel like a lot of padding, unnecessary miniatures (the huge T-rex in the Wayne Manor expansion has to be seen to believed) and an unfortunate lack of attention to detail in the proofing.

But who am I kidding? They’ve raised millions for this game. The people keep buying as long as the plastic keeps coming! I’ve got a few more in the pipeline coming to me, but these big mini-heavy Kickstarters are beginning to wear me out a bit, especially financially, and I do wonder how much of all this content I’ll really get around to actually using. Regardless, Batman: Gotham City Chronicles a fun, attractive game that I would have bought at retail and been happy with, without the tonne of extra stuff. 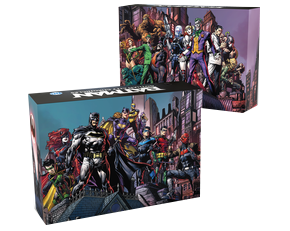