A tactical skirmish miniature game where players choose a company of models to battle enemy factions on the most brutal battleground imaginable, the realms of Hell!

I’ve had my eye on Hell Dorado for quite some time, and those stunning miniatures have often beckoned. I also love the background concept: 16th century empires squabbling with demon hordes, and each other, for territory in the subterranean regions of Hell. I managed to put aside temptation for quite some time, and it did seem the game was fading away after it was dropped by Asmodee, but Cipher Studios picked up the licence (sadly, it now seems to be fading away again) and when I saw the rulebook was on special recently I grabbed a copy.

Since then I’ve painted three companies—Demons, Westerners and Immortals. The miniatures are imaginative, still made of metal, often frustrating to assemble—some modelling experience is required—and the results somewhat fragile for tabletop gaming, but they are beautiful when painted up.

Like any tabletop miniatures game there are a ton of special abilities in the rulebook, so this rules summary and set of reference sheets should make life easier for players of the game. Unfortunately the unit cards that come with the figures are some of the most atrociously designed, unreadable messes I’ve ever seen, so I had to redesign them for the models I have—though I must forstall requests and say that I have no current plans to take on the huge task of redesigning them all and making them available for download.

I really enjoy games of Hell Dorado and it’s different enough to have a special place in the list of tabletop miniatures games I play. And there really is nothing like those gorgeous, often weird miniatures. 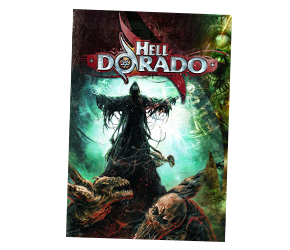